Robert Shwartzman led every lap of the Formula 2 Sprint Race in Bahrain as neither Mick Schumacher or Callum Ilott were able to score big points.

The Russian driver was joined on the podium by fellow title outsider Nikita Mazepin and Louis Deletraz after overtaking masterclasses from both of them.

Ilott made contact with Jehan Daruvala at Turn 10, damaging his car and getting a penalty, scoring no points, while Schumacher could only finish seventh and collect two points.

Reverse grid polesitter Shwartzman started well and kept the lead, but was under pressure from the fast-starting Yuki Tsunoda. But soon after Tsunoda started dropping back down the field with a slow puncture after contact with Marcus Armstrong at Turn 1, forcing him to pit and ruining his race.

Mazepin and Schumacher might be teammates at Haas next year in Formula 1, but the pair were scrapping on track in the early stages, swapping positions twice on Lap 3. Mazepin got the move done a lap later, and then moved into third with a calculated move on Daruvala.

Callum Ilott closed in on Schumacher’s lead in the championship during the Feature Race and he moved up to sixth with a great pass on Jack Aitken.

Simultaneously, Theo Pourchaire pulled over to the side of the road after his fire extinguisher in the cockpit went off, bringing out the Safety Car.

When green flag running returned, Ilott was all over Schumacher, but outbraked himself into Turn 10, hitting Daruvala and damaging his own car. The Indian driver was out and Ilott had to pit for repairs, coming out way down the field and putting a huge dent in his championship challenge. To make it even worse, Ilott was given a drive-through penalty for the incident.

Mazepin continued his charge, passing Armstrong at Turn 1 after a lock-up from the New Zealander. Pedro Piquet could smell the podium as Armstrong began to struggle and he made the move to take third with some excellent driving in the middle sector.

With Ilott out of points contention, his UNI-Virtuosi teammate Guanyu Zhou was doing everything he could to help Ilott’s title challenge. The Chinese driver suffered damage battling Schumacher on Saturday, but made a move stick on Lap 15, taking fifth.

After holding off Christian Lundgaard, Schumacher might have been feeling comfortable. However, having pitted under Virtual Safety Car, Louis Deletraz was charging through the field and easily passed Schumacher for P6.

The Swiss driver continued his great run, passing Zhou and Armstrong. He then got onto the podium as teammate Piquet’s car came to a halt on the penultimate lap, costing him a maiden Formula 2 podium.

On the final lap, Lundgaard came back at Schumacher and took P6 at Turn 11, relegating Schumacher to P7, meaning the gap to Ilott is now 14 points.

But Shwartzman comfortably came over the line for his fourth win of the season, ahead of Mazepin and Deletraz. Armstrong was fourth, with Zhou ahead of Lundgaard. Schumacher had to settle for seventh, with Saturday’s winner Felipe Drugovich in eighth.

Formula 2 returns next week to Bahrain again, this time the shortened circuit for what’s set to be an incredible final round of the 2020 Formula 2 season! 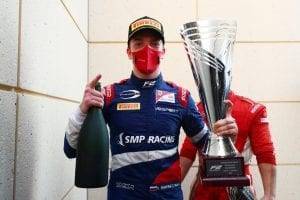