Starting the first race of the weekend in seventh, the 22-year-old executed a stellar job in moving up to third, almost securing his eighth podium of the season, ahead of his teammate, Oscar Piastri, for the majority of the 23 laps.

But Shwartzman could not prevent the Australian from winning the championship title in Sprint Race 1. Still, despite still having a chance to take the crown for himself this year at that time, Shwartzman says he agreed not to take any risks in Sprint Race 1.

“In Race 1 we got a decent start, and in the beginning, the car felt really strong compared to the others and I got up to P4. The balance shifted a bit throughout the race, but still, the pace was really good.

“With five laps to go, I made a mistake in turn 12, with a lock-up that allowed Oscar to come close. I didn’t really expect the attack, so he went in, and I didn’t want to take any risk so I finished in P4.”

The Russian driver found it quite a relief to finish in a higher place in Sprint Race 2, taking advantage of the reversed-pole sitter Marcus Armstrong’s discouraging result.

Shwartzman managed to secure his eighth podium of the season, extending his P2 lead in the standings from UNI-Virtuosi’ Guanyu Zhou.

“In Race 2 I gained two positions straight away, and then I managed to pass Ticktum. We had two safety-car situations in a row and it was really tricky to keep the temperatures, but I gained great momentum out of the VSC for Armstrong’s stoppage to take P2.

“I was hoping to have the pace to battle with Zhou, but the balance was a bit off, with my front right suffering a lot. I couldn’t really manage to attack.”

Heading to the season finale on Sunday, Shwartzman is staying hopeful of having a race finale to remember with the team.

“Tomorrow we start Race 3 at the same time of the day as Race 1, where the balance was better. Hopefully we will have a clean run tomorrow to end the season on a high.” 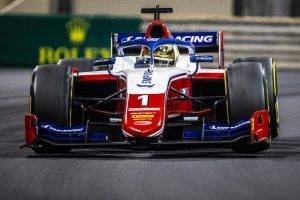