Robert Shwartzman‘s dominant Baku victory, his first of 2021 FIA Formula 2 campaign, was not without its challenges.

The PREMA driver admitted to losing confidence around the street circuit after experiencing a difficult Qualifying session, which saw him start on reverse grid pole for the first Sprint Race.

“I did a mistake and I sort of underestimated the braking point.

“After that you lose confidence and it’s hard to get back on the brakes, so this track is very challenging.”

Despite this, the Russian driver cruised to an impressive lights-to-flag victory,  leading all 21 laps and finishing 5 seconds ahead of Carlin’s Dan Ticktum.

Baku is uncharted territory for 18 of the drivers on the grid and Shwartzman stressed how crucial it was to understand a track that has caught out drivers up and down to F1 and F2 grids.

“Baku is a new track for me. When you drive between the walls and like Dan [Ticktum] said it’s a much quicker track than Monaco, you sort of need to gain some confidence.

“The main thing is to find the right braking points and that’s quite challenging. One way is when you approach the corner you can feel the car either sliding or understeering.

“But you are never sure what’s going to happen if you brake, so if you are going to miss the braking point or not. You don’t really want to miss any lap, you always want to continue to improve.

“To be honest, I’m not entirely sure which track is harder Monaco or Baku, but for sure this track it’s special.”

Shwartzman’s first victory and podium finish this year follows a tough opening two rounds for the 21-year-old, with two retirements and one non-point scoring finish.

With Ferrari’s watchful eyes at the podium for their Academy driver, Shwartzman’s championship challenge now looks set to be firmly underway.

He will be hoping to replicate his strong race pace in the second Sprint Race this afternoon, as he lines up 10th on the reverse grid.

Can Shwartzman fight his way to a second podium of the weekend? 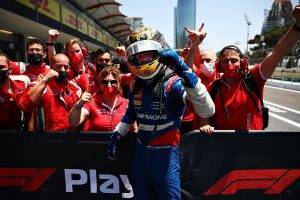