With three rounds completed already, Formula 2’s been hotly contested in 2021. And with the championship heading to Sunny Silverstone, we’ll begin to see who can thrive when the heat’s turned up.

11 – The amount of points Guanyu Zhou’s points lead was reduced by heading into Silverstone. He still holds P1 in the championship on 78 points, but Oscar Piastri is only five points behind.

3  – The number of British teams in the Formula 2 championship for 2021 – Carlin, Uni Virtuosi, and Hitech, who’re actually based at Silverstone!

32 – The number of different winners of GP2/F2 rounds hosted at Silverstone, including 8 British winners (and an Anglo-Thai winner too!)

2 – The most F2 wins for a driver at Silverstone, shared by both Pastor Maldonado & Lewis Hamilton (who holds the F1 record too!)

24 – The number of times a British driver’s taken a podium finish at Silverstone, the most recent being Jack Aitken in 2020’s sprint race

8 – The lowest grid slot for a Silverstone race winner, achieved by Lewis Hamilton in 2006 en route to a double weekend victory, so far remaining the only victory achieved from outside the top 5 of the grid.

2.5 – The average grid slot for a Silverstone race winner

35.29% – The percentage of wins that have come from pole position, with 73.53% of all victories coming from within the top 3

99.993s – The amount of time it took Jack Aitken to complete the fastest race lap in Formula 2 at Silverstone, set during the 2019 Formula 2 weekend

71 – The total number of laps across all 3 Silverstone races – 21 in both of the Saturday Sprint Races, and 29 in Sunday’s Feature Race

4 – The number of InsideF2 staff who’ll be at Silverstone over the weekend – Zoë, James, LA & Luke-John!

Will Guanyu Zhou hold his slimming championship lead, or will we see a new name at the top of the standings at the halfway stage? 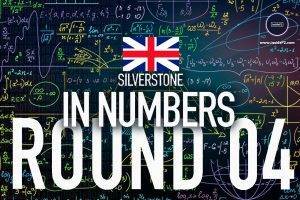