Spa-Francorchamps : A Lap and a Bit

Spa-Francorchamps : A Lap and a Bit

As a child, I had always dreamed of visiting Spa-Francorchamps in Belgium. The Belgian Grand Prix in the Formula 1 season was the race weekend that tended to fall the closest to my birthday, add to that its rich history and iconic setting and corners, like many motorsport fans it made it the one I always had on my bucket list.

Living in South Africa, it’s not easy to travel abroad due to the costs and the unfavourable currency exchange rate, however, an opportunity came up to attend the Belgium Grand Prix weekend with my brother.

We are both passionate motor racing fans and having competed in motorsport ourselves back home in South Africa, we respect the effort and skill it requires for these drivers to perform.

I was particularly excited to see the FIA Formula 2 race as I knew that the nature of the Championship and single-spec cars would guarantee some wheel to wheel action and overtaking.

We arrived early on Saturday morning to the isolated and tiny town of Spa in the middle of the Ardennes Forest. Circuit de Spa-Francorchamps is tucked away into the hills, quite a distance from the town and the car park.

We walked on what felt like a downhill stream of race fans until we finally got a glimpse of the circuit and the most famous corner in motorsport, Eau Rouge.

I remember the two of us just staring at this fast left-right-left kink in front of us, and thinking ‘WOW’. We always knew that this section of the circuit was steep but until you see it for yourself you don’t realize how steep it actually is.

As the morning progressed, we spent time exploring the circuit and discovering as many corners and vantage points as possible. The excitement was growing for ourselves and the rest of the fans alike. We watched the Formula 1 free practice three session from the Raidillon corner and were blown away at how fast the cars come up the hill and onto the Kemmel straight.

The main event on Saturday is the F1 qualifying session, which we watched from the bus stop chicane, I couldn’t wait to watch the F2 feature race as this would be our first taste of racing and Formula 2 for the weekend.

The sound of the F2 cars on the warm-up lap was impressive. You could feel the power of the cars as they passed us warming up their tires and brakes with the engines hitting the rev limiter.

I was really excited to see Mick Schumacher live in action for the first time and Nick de Vries was the man starting from pole. I knew I was going to be watching some future F1 stars in action.

When the lights went out we could hear the roar of engines all the way around the circuit while we followed the action on a big screen right next to us. The speed that they came past us on the first lap pushed our excitement levels higher and we knew we were going to witness an exciting race.

In a flash, all the cars had passed us at Stavelot heading back towards the start/finish line to begin lap 2 and we could then only hear them in the distance.

We followed the race on the big screen as the cars negotiated the La Source hairpin, and down the hill before being launched steeply uphill towards the sweeping left-right-left corners of Eau Rouge and the blind summit of Raidillon.

These are the moments when you recall every little detail on the people around you, their eyes, faces, and the sound resonating as you hear the gasps from the fans…..

Before we knew it, red flags were displayed in front of us as the cars limped back to the pits with damage.

We all quietly stared and waited for a replay of what had happened, but nothing was shown until eventually, a message was shown that the race was not going to be restarted and there would be no further track activity for the day.

As a race fan at the track, you don’t have the luxury of commentators, so despite knowing there had been a big shunt, we still had no idea of who had been involved in the crash or how serious it was.

It is a very long walk back to where we had parked our car, and along the way, we saw the cars that were involved in the accident being transported back to the paddock.

It was probably about an hour since the crash when we passed the Raidillon corner and we could feel a strange silence amongst the fans that were still at the circuit. Without knowing any of the details our instincts told us that something really terrible had happened and this was later confirmed when we heard the tragic news of the passing of Anthoine Hubert.

We couldn’t believe it. We always know that things like this can happen but with the way safety has improved over the years you can easily forget how dangerous motorsport can be.

A trip of a lifetime had ended so tragically with a death. A lap and a bit of Circuit de Spa-Francorchamps was my first experience of a race at Spa.

The next day you could feel the sorrow in the air. We saw a parade of the medical crew being applauded, a brave mother and brother stand on the start/finish straight holding the helmet of their loved one during a minute’s silence.

We have huge respect for these sportsmen and women who complete to entertain us. I can only imagine what was going through the minds of the Formula 1 and Formula 2 drivers standing there facing Anthoine’s helmet.

Lap 19 of the F1 race saw the entire crowd stand up and applaud in memory of car 19. At that moment nothing else mattered. It was great to witness fans embracing, fans appreciating these gladiators.

It was a Spa experience that we would never have predicted but one which I am sure most will never forget. It makes us truly realize that we are only human, and life is precious.

Anthoine’s tragic death has inspired me to respect and follow these incredible young drivers as they fearlessly pursue their dreams. 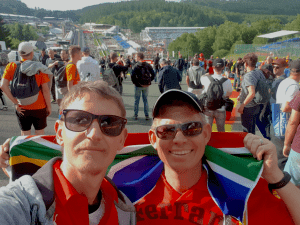