Speed and Sounds with Jack Aitken

Speed and Sounds with Jack Aitken

We bring you a new feature called Speed and Sounds. This edition comes to you from current FIA Formula Two Campos Racing and Williams Racing Formula One reserve driver, Jack Aitken.

As part of new our Team Radio section on insideF2.com, Jack was kind enough to catch up with insideF2 and share a Spotify playlist for our followers to enjoy.

Music for most of us is built into the fabric of our day to day lives, whether singing in the shower, listening to our favourite songs during the daily commute, or now to keep spirits up whilst we stay indoors during a global pandemic, music impacts mood, whatever we are doing.

This is no different for athletes as they train and compete; listening to music can get many into the zone, whether that is to compose themselves ahead of an event or to exhilarate and get the adrenaline pumping.

Jack said that he performs the warm-up “half an hour before I get in the car and I will always listen to music”, and when we started discussing the vibe of the playlist he mentioned that this is the type of music I have to get me in the right kind of mood.

With respect to other drivers, he said, I know some people go a step further and have really intense music for their warm-ups, but that doesn’t quite do it for me.

Jack, like many of us, is currently limited to homebound work and he created this upbeat playlist with that in mind:

“This is really for anyone working from home; I hope this helps.”

He said the playlist was inspired by what he is listening to at the moment to keep him engaged whilst doing his work. Individually discussing the songs within the playlist and how that compares to what he normally listens to ahead of his race sessions, Jack said, â€œto be honest, its not too dissimilar to the kind of music that I have put in the playlist.

The playlist as a whole has a light and upbeat vibe and Jack chatted about having a wide spectrum of musical tastes when listening to his own music “I tend to just have my favourite music on shuffle to be honest” and “I do generally listen to a bit of hip-hop on a day-to-day basis” so there is an element of that in there too, mixed with Australian influences because of his girlfriend.

We talked about playing musical instruments and any other musical interests, “I used to play the drums when I was younger” so maybe fans and followers can look forward to seeing something on his social media in the future. (No pressure, @JaitkenRacer!)

Looking back on Jack’s 2019 F2 season, we talked about what song would come to mind, to sum it up:

“I would say, Peaks and Troughs by We were Promised Jetpacks” he said playfully.

On the whole, it was considered a good season for the Campos Racing team whom prior to the driver joining the team had been winless in the current format of F2. Aitken had some memorable moments, finishing the season with three wins which included an F2 season highlight, a win at Silverstone.

And with hopes for the 2020 season when we get back up and running, we asked about a potential song for the year, â€œIt may be a bit boring but certainly Queen, We Are the Championsâ€ which would hopefully be the aim for both Jack and Campos Racing as they both look to build on those impressive peaks from last season.

Let us know what you think of Jacks Spotify Playlist (linked below) in the comments or on Twitter by tagging us into your tweets @F2inside. Also, check out our own insideF2.com Spotify Selected Playlists online at our TEAM RADIO page. 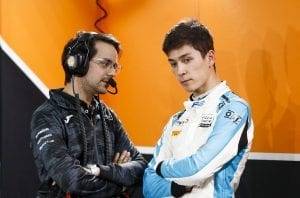