Carlin took a memorable double podium at their home race in Round 7 of the 2022 FIA Formula 2 championship, which Stephanie Carlin called “incredible”.

Carlin said: “It’s been amazing and to get those results at home is just really incredible. The last race for Logan (in Baku) was really positive and it’s given him a real confidence boost.

“What we saw here was a really confident Logan Sargeant on a track he knows really well,” Carlin’s PR and Commercial Manager said.

21-year-old Sargeant has a good record at the Northamptonshire track, winning from pole position in the 2020 Formula 3 Feature Race, as well as a podium in the Feature Race a week earlier when F3 held two rounds in Britain.

“Liam has had such bad luck over the season so far, he started off so strongly in Bahrain and through situations out of his control, numerous times, he has lost out,” Carlin explained.

Lawson’s future F1 chances have taken a boost with a strong result on the track as well as confirmation that the 20-year-old has replaced Jüri Vips as Red Bull Racing’s test and reserve driver, following the Estonian being sacked from the role after using racist language during an online gaming stream.

Sargeant’s victory propels him up to third in the title hunt, although he’s still a massive 60-points behind championship leader Felipe Drugovich of MP Motorsport, with ART GP’s Théo Pourchaire, who finished second to Sargeant, between them on 106-points.

Lawson moves ahead of fellow New Zealander Marcus Armstrong and Vips on countback, with the trio tied on 59 championship points.

Carlin’s high-scoring weekend of 42 points has seen them jump ahead of PREMA Racing into third in the teams’ standings, with 147-points, 23 behind leaders MP Motorsport. 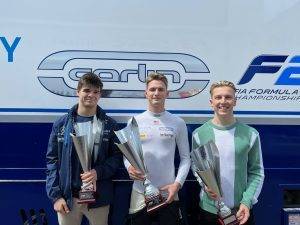