Robert Shwartzman took his maiden win on Saturday in a rain-delayed Formula 2 feature race in Spielberg. The Russian rookie delivered an exciting performance in treacherous conditions, at the same circuit that seven days before he scored his first podium finish at.

The Ferrari Driver Academy star kept control of the situation during the opening part of the race after starting seventh. He managed his tyres so when it was time to push it was game on.

Just before the pitstop, Shwartzman put in some quick laps to maximise his position. He then dived in for the mandatory pitstop, a swift one by the team, and used the fresh tyres to set a blistering pace.

The 20-year-old kept gaining positions and eventually made a great move for what would turn into to the lead when the pitstop phase was over. He looked comfortable as he led the field for the final part of the race and across the line.

Shwartzman said: “I’m super happy with this result. I didn’t expect to see myself in P1 today! In the beginning, I was a bit nervous for an issue with the car which was going into safe mode, and I was lucky with the red flag so we could get our position back in P6. When we finally started, I took it a little bit easy because I had never driven this car in the wet and I had to take a look at the braking points and lines. I started to get more confidence, and also looked at the other drivers.

“When it began to dry up, I picked up the pace and started improving my position. The pit-stop was really quick and, after a few laps, I caught up with (Guanyu) Zhou. We had an intense battle, but I managed to get him. I was in front and I pushed as much as I could. Then in the final laps, I just tried to keep the car safe and bring the win home.

“I want to thank Prema, SMP Racing and the Ferrari Driver Academy but the biggest thank you goes to my dad. Hopefully, he is watching up there with a happy smile.”

Fellow Ferrari Driver Academy racer Mick Schumacher also showed an impressive performance. After being in the wall on Friday he put together a grand recovery.

Careful tyre management and some great moves led the German driver to fourth after starting ninth.

Schumacher said: “From ninth on the grid to fourth place – we can really be very satisfied with that. In the end, even the podium was within reach, unfortunately the race was one lap too short from my point of view. Nevertheless, I’m please with our race pace, especially with the second set of tyres I was able to attack well and overtake some cars. With fifth place on the grid, we’ve also got a good starting position for tomorrow’s race – this time probably in the dry again.”

With the win today Shwartzman moves into the championship lead while Prema Racing also head the teams championship ahead of Sunday’s sprint race. 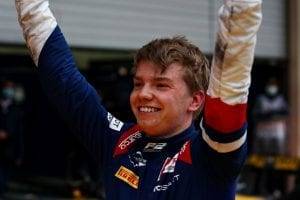