Hitech Grand Prix was on the hunt for good results in Monza, but technical issues in the Feature Race put Liam Lawson and Jüri Vips out of the race.

Lawson was particularly unlucky as he picked up a fifth and a fourth in the Sprint Races and running as high as second in the Feature Race.

But the fire extinguisher going off put an end to the Kiwi’s race as he was forced to stop near the exit of the pit lane bringing out the Safety Car and ending his race.

Lawson said: “The pace was good in Quali. I think that I was a little bit too far back for the perfect tow that some of the other guys got, but I think that the pace was pretty good, and P4 was ok.

“In Race 1, I got brake checked by Pourchaire and lost a wing. Then in Race 2, I had an average start, the pace was good, but just a bit stuck.

“The real shame was the Feature Race today. I had a nice start; I had good pace on the options; I overtook Jehan (Daruvala) off the start and then overtook Zhou.

“I was able to stick within 1 or 1.5 seconds of Piastri. Then with the Safety Car, we boxed, obviously with our position at the end of the pit lane there we couldn’t release; I lost like two spots there.

“On the restart, I lost a place to Pourchaire, and they were fighting so hard I just decided to save and wait. I had really, really good speed, but I wasn’t using it yet because I was waiting for their tyres to go off.

“And so, as Jehan started struggling, I pushed and then as we were going down the straight as I pulled out to overtake him my fire extinguisher went off, went all through the car and cut the power, cut everything basically.

“It was disappointing as at that point I was just starting to push, and we had loads of tyre life left, and the car felt really good. I think we would have been on for a good podium … at least.”

Vips had to fight to make up for qualifying ninth, but he had to be satisfied with eighth and sixth in Saturday’s Sprint Races.

The Estonian hoped to get more out of the Feature Race, but a technical problem saw him also retire from the race.

Vips said: “Obviously, a very poor weekend. I have put my hand up and say that some things were in my control, I didn’t do the best job this weekend.

“In Quali, I think we had good pace, but in the second run, I got a bit screwed by people playing games ahead, I got hit then and put on the grass, I had dirt all over my tyres. In the second run, when everyone improved, I didn’t have the chance to.

“In Race 1, I guess my ego got in the way, and I tried to keep the lead when realistically we didn’t have the pace to do that.

“I should have let Pourchaire go and keep P2. I could have scored some good points but instead ran out of tyres there.

“We made a good step with the car, and in Race 3, early on, we had good pace, and things were looking quite good.

“But then the engine started cutting and kept doing that, I lost some pace, and then it just blacked out everything, and that was it.”

Hitech GP will head to Sochi for Round 6 of the FIA Formula 2 Championship with the hope of getting more good results and fewer technical issues. 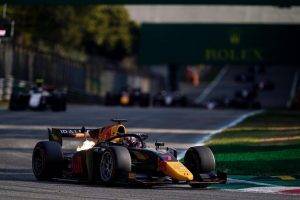