Silverstone has hosted British Grand Prix racing since the early 1950’s and always attracts a massive crowd of fans.

When a motorsport fan hears the word ‘Silverstone’ they immediately know that this circuit is regarded as the motorsport ‘home’ of the world.

Most Formula 1 teams, as well as many other well known racing teams, are based in the UK. Therefore, this round is an event where all British teams want to do well.

I’d watched races at the circuit on TV while growing up but never thought that I would visit there someday. The opportunity presented itself in 2005, but it so very nearly didn’t happen…

The occasion was going to be special for a number of reasons. It was going to be the first motorsport event I would be attending outside of South Africa, where I’m from.

Plus, it was the first major motorsport event that my dad, brother and myself would be attending together as a family.

On top of this, it would be the first time we would experience the newly launched GP2 series (now known as Formula 2).

GP2 was launched earlier in 2005 and Silverstone was set to be the first time the series raced on British soil. This opportunity was going to be a once in a lifetime experience and we were very excited.

We arrived in the UK a few days before the British Grand Prix race weekend and were enjoying all the tourist attractions London had to offer.

With just a day to go before the start of Free Practice 1 our race weekend plans were thrown into turmoil.

News broke out about terrorist attacks in London which sadly claimed the lives of 52 innocent people and left more than 700 injured.

Thankfully, we weren’t harmed by the atrocities.

Understandably, we thought events would have a bearing on our grand prix experience. However, the country, and motorsport community stood united and a decision was taken for the event to go ahead.

I remember our excitement when driving up to Silverstone on the Friday morning. The queues were long and when we finally got inside, the GP2 cars were the first to take to the circuit with the V8 sounds lifting the adrenalin levels.

This was the inaugural season of the GP2 series, which was replacing the discontinued Formula 3000 series.

The GP2 series was formed to make racing more affordable for the teams and to make it a better training ground for drivers to make the jump into Formula 1.

GP2 made it mandatory for all teams to use the same chassis, engine and tyre supplier so that the emphasis would be more on driver ability.

The car was based on a Dallara chassis and powered by a Renault-badged 4.0 litre naturally-aspirated V8 Mecachrome engine.

We walked around the British Grand Prix circuit twice on that first day, taking in as much of the experience as possible. Maggotts corner and Becketts blew our minds when we witnessed the cars’ change of direction at high speed.

GP2 Qualifying on the Friday afternoon was a close affair. Nico Rosberg stuck it on pole by 0.041 ahead of Nelson Piquet Jr. and Heikki Kovalainen, who qualified in third.

Kovalainen was the top driver early in the season, winning three of the first five Feature Races going into the British round. He was sitting on 52 points with a handy 18 point lead over British driver, Adam Carroll.

Gianmaria Bruni was a further three points adrift with Nico Rosberg and Scott Speed tied for fourth on 29 points.

With there being just a handful of people still around at that time, it allowed us to chat with some of the drivers as they were leaving the circuit for their hotels. This experience is something we will never forget.

That night the atmosphere in the campsite was electric. Most tents had their team and driver flags up displaying who they were supporting.

The funfair, live bands and a variety of entertainment kept the fans buzzing. I remember the party continuing through the night. We didn’t get much sleep!

Saturday’s Feature Race had drama before the race began when Piquet Jr. had an electrical problem on the way to the grid, causing him not being able to take the start of the race. This left Rosberg alone on the front row.

There was plenty of action during the race. Alexandre Negrao and Can Artam collided and there were also spins from Giorgio Pantano and Mathias Lauda. Carroll had a high speed spin directly in front of us.

Rosberg pulled off his first GP2 Feature Race win ahead of championship leader Kovalainen, who finished in second place, and Alexandre Prémat who took the third step on the podium.

Rosberg became the first driver to win a GP2 race from pole.

The Sprint Race on the Sunday saw Olivier Pla start from the reverse grid pole position.

We saw some good overtaking at Abbey. Piquet Jr. spun at Becketts which brought out the safety car for a few laps while Nicolas Lapierre retired his car in front of where we sat.

There were some good battles throughout the field which provided a lot of entertainment. Pla went on to win the race ahead of Scott Speed and Kovalainen.

The results from this event saw Rosberg leap to second in the championship standings, 20 points behind leader Kovalainen.

Five victories in the second half of the season would see Rosberg ultimately crowned the 2005 GP2 series champion.

After the races were done and dusted we took a stroll next to the paddock and got up close to the GP2 pit to watch the mechanics prepare the cars to be sent to the next race.

This experience was our first taste of GP2.

Although it is now known as Formula 2 it is essentially the same – but has become an important and exciting feeder series, gaining much popularity and respect.

Our legs were sore from the many kilometres we had walked that weekend but it was all worth it.

It was a British Grand Prix weekend full of memories that we will never forget. 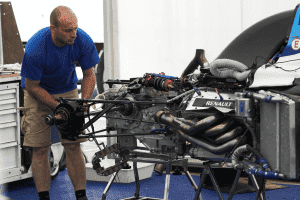