The 2020 Formula 2 season is coming to a climax with a doubleheader in Bahrain. It’s time to ask some of F2’s alumni to discuss their views on the season, as well as their pick for the Championship, and the driver that has impressed them most.

Between them the panel have made 127 Grand Prix starts, seven wins in the second tier of motorsport, and have won some of the world’s biggest races.

To discuss this season our panellists include:

We asked them specifically about this year’s 2020 FIA Formula 2 Championship.

In 2020 we have had a really exciting battle. With two rounds left of the F2 season which drivers have impressed you the most?

Sebastien Buemi – “I’ve been watching more races this season as I’ve had more time on my hands. As well as being part of DAMS I’ve enjoyed this season. I was impressed by Shwartzman at the start of the season by how strong he was and now Mick Schumacher is doing a really good job coming back very strongly. He’s most likely to win the Championship.”

Karun Chandhok – “For me, Shwartzman the rookie. You have to factor in that Schumacher is in his second year, Tsunoda and Lundgaard as well. Ilott, Ghiotto, Mazepin and Schumacher have all had a season under their belts – the rookies have done massively well.”

Mark Blundell – “Mick Schumacher has impressed me this year. He’s come into the series from the back of his results last year which was impressive but not as impressive as the name would give you. He’s started off a little bit slow but he’s grown with the pressure. He’s had to go with it because of the expectations of his father’s name and he’s delivering off the back of it. He’s got the might of the Ferrari team behind him. He’s got a huge following and I would have to say he’s delivered on all levels so you’ve got to look at him as a guy that will be in the F1 paddock sooner rather than later.”

Vincenzo Sospiri – “They are all quite fast and competitive. Shwartzman for me is someone I’ve been following since he was a kid in karting and he’s a special talent. He’s quick. Mick Schumacher, the son of Michael, is a special person who is doing very well. He’s growing up. There are other talents out there but I don’t see the next Charles Leclerc or Lewis Hamilton from this class.”

Red Bull has three junior drivers on the grid at the moment with Yuki Tsunoda, Jehan Daruvala and Jüri Vips. What have you made of their performances so far this season?

Sebastien Buemi – “I’ve been really impressed by Tsunoda. I think he’s done an amazing job and Carlin is a strong team but I didn’t expect Yuki to do so well. I’ve been very impressed by his maturity and the fact he’s consistent and he always grabs good opportunities – so I think he’s done a really good job. It’s not been easy for Vips jumping in during the middle of the season or having no winter testing, so it’s not an easy situation. He’s proved he has some strong pace but obviously he needs more time. As for Daruvala, I think he’s been competitive although not as much as Tsunoda and Vips – but he’s got some pace.”

What are the challenges that Jehan Daruvala must overcome to become India’s next F1 driver?.

Karun Chandhok – “Obviously, Jehan’s racing in F2 at the moment. I think he’s not as good this season as he was hoping for. He’s behind Tsunoda in the points so he will look at doing another F2 season. That will be the first step and then depending on how he gets on next year in F2 that will lay down the foundations of what his future may be – it’s in his hands somewhat. I think if you can score podiums and win races then you put yourself on the radar and that’s important to do.”

How much progress do you think Callum Ilott’s made from that debut season?

Mark Blundell – “Callum’s come on leaps and bounds and has matured as a driver in and out of the car. I think the environment at Virtuosi has given him stability and a platform to show his talents so he’s been mightily impressive. His performances have been incredibly strong and there’s probably a little bit more left in the tank from his side of things for where he goes next. But as a British talent, he’s up there with some of the top young talent trying to get into F1.”

With the series going into the final two rounds of the season who do you think will leave Bahrain as champion?

Sebastien Buemi – “It’s hard to say as it will depend a lot on how you handle Bahrain because you’re going to have four races there with one layout being different to what we know from recent years. I would have to say Schumacher for me when you see how many races he’s led. He’s got the most podiums this season. He’s come on strong in the second half of the season and if it continues in that trend then it will be Schumacher. But Ilott and Tsunoda aren’t far behind. However, they will need some luck in their favour.”

Karun Chandhok – “It’s been a really unpredictable year in some ways. Obviously Schumacher has got a decent margin of 22 points if he plays it sensibly and stays out of trouble. Prema has a reliable car. Even if he has to give up a couple of places in the race, as long as he’s staying where he needs to be in relation to Callum and Robert, and doesn’t make any mistakes, he will get his Championship. Prema are a top-quality team so if anyone’s going to give him a Championship it’s them.”

Mark Blundell – “Schumacher will leave as champion. I don’t see anyone else taking the title. I might be wrong but it might be one of those fairytale endings and we will see what happens next in that chapter but it’s going to be down to the wire.”

Vincenzo Sospiri – “Schumacher’s got a bigger chance at the moment as he has the points cushion, but you never know what’s going to happen with four races left. There’s still a lot of points left on the table. Tsunoda has impressed me quite a lot in his first year. Ilott, when he’s at the front is very fast, but in the middle of the pack he’s struggling for me.” 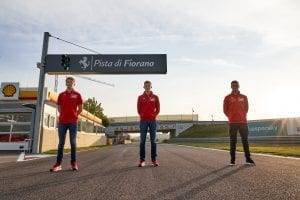