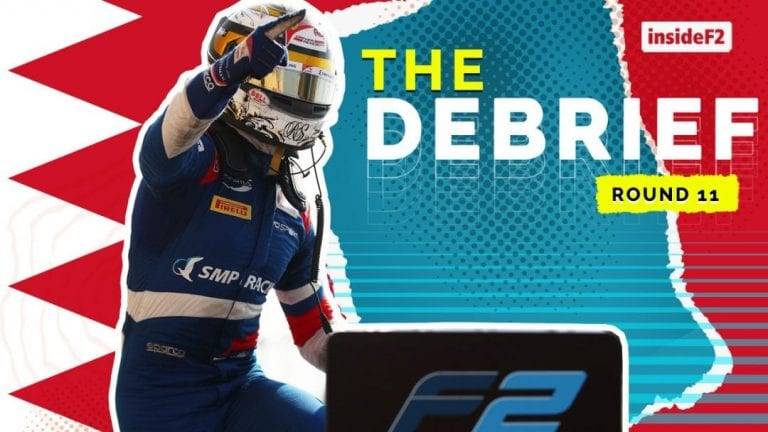 Two rounds, four races, that’s all that’s left of the 2020 Formula 2 season as the teams leave Russia upon conclusion of the event in Russia.

And it was yet another intriguing weekend at the Sochi circuit, built around the 2014 Winter Olympic park. We saw a rare front-row lockout, overtakes, crashes and a brand new winner, but before all of that action, let’s cast back to Friday, the first day of running in Russia.

But before all of that action, Formula 2 finally returned after two months away. Sean Gelael made his return after recovering from injury, replacing Juri Vips at DAMS, while 17-year-old Theo Pourchaire made his F2 debut with HWA, replacing Jake Hughes.

The session was not a smooth one, with Artem Markelov spinning and causing a red flag, before Marino Sato did the same, stopping the session once more.

In the end it was Nikita Mazepin who went quickest, with Jehan Daruvala, Yuki Tsunoda, Dan Ticktum and title outsider Christian Lundgaard all showing pace. 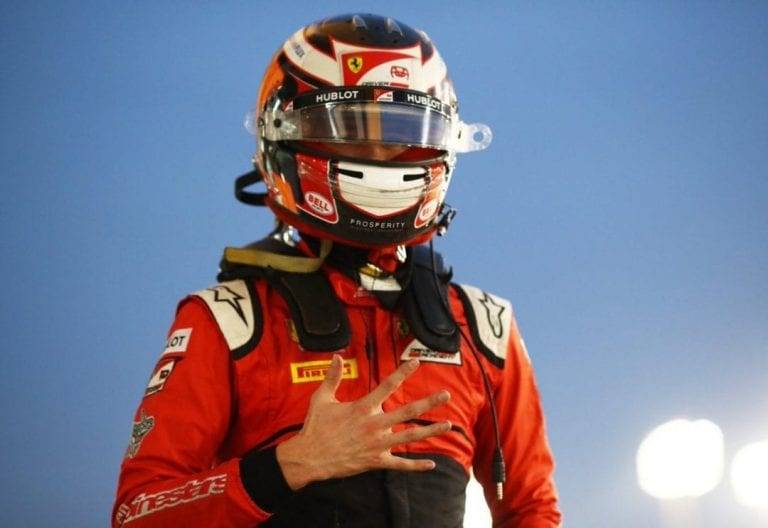 As the sun began to set on the island of Bahrain, the drivers ventured back onto the track for half an hour of qualifying.

With four points available for pole position, the session was a crucial one. Title challenger Callum Ilott set the early pace with a stunning lap, leading Marcus Armstrong and Guanyu Zhou.

It wasn’t so positive for Yuki Tsunoda however. Looking for a strong weekend to impress Alpha Tauri, the Japanese driver spun before he set a lap time, meaning he would start 22nd and last.

Tsunoda’s off caused a red flag and on the restart there were big improvements for Felipe Drugovich and Ticktum, who moved up to second and third respectively. But nobody could trouble Ilott, who took his fifth pole of the season and four crucial points in the title battle.

Championship leader Mick Schumacher could only manage tenth, giving Ilott a clear advantage ahead of the weekend. 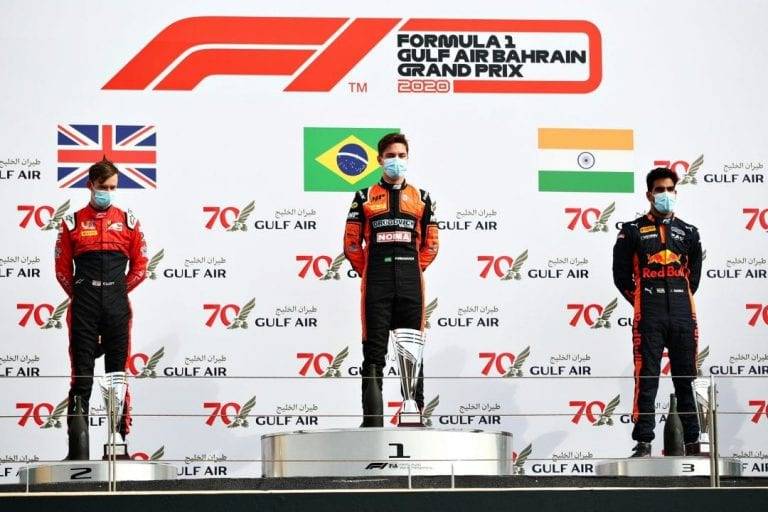 Saturday saw arguably the most important race of the season so far and as always, the start played a crucial part.

Ilott initially got away well from pole, but went deep into Turn 1 and allowed Drugovich to sneak through into the lead. Meanwhile, Schumacher made up five positions to find himself fifth at the first corner, and made in fourth with an overtake on Zhou.

On the medium tyres, Ilott’s pace began to suffer and he dropped back behind Armstrong and Schumacher before eventually pitting.

The German then made a move on Armstrong, taking P2 in the race before the pit stop phase.

Drugovich re-overtook Ilott after his stop and never looked back, taking a dominant victory.

The hard-charging Daruvala managed to get in front of Schumacher and hold him off, taking his maiden podium in Formula 2.

Schumacher was fourth and saw his title lead chopped by another six points. Behind him came Mazepin.

Tsunoda fought hard to work his way up to sixth with a battling drive from last on the grid, ahead of Armstrong and Shwartzman, who would line up on the front row for the Sprint Race. 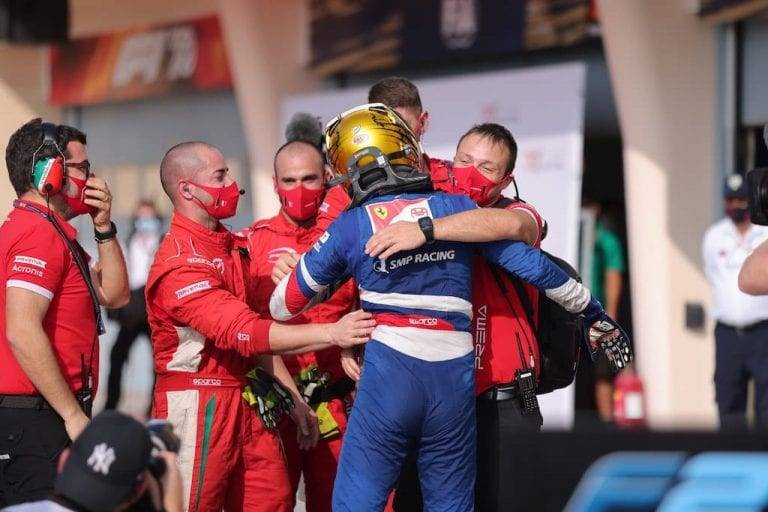 Sunday’s Sprint Race was another chance for the two title protagonists to put a marker down and add some points to their tally.

This time though, Schumacher didn’t get his traditional fast start, and neither did Ilott as Shwartzman led from reverse grid pole. Tsunoda was chasing him, but suffered a puncture and had to pit at the end of Lap 1.

Mazepin started an early charge, passing Schumacher and then Daruvala to move into the podium places, while Ilott ranged onto the back of Schumacher.

It was looking good for the British driver until he locked up at Turn 10, sliding into Daruvala and ending the Indian’s promising race. It severely damaged Ilott’s race as well, losing time in the pitlane and receiving a drive-through penalty.

Pedro Piquet found his way into the top three with a calculated move on Armstrong, who was beginning to struggle with his tyres.

Zhou passed Schumacher for fifth, and the German lost another position to Louis Deletraz, who was benefitting from a pitstop under Virtual Safety Car.

The Swiss driver continued his charge and when Piquet’s car broke down on the penultimate lap, Deletraz filled his teammate’s place in the top three.

Schumacher was having difficulty by now and on the last lap he lost out to Lundgaard, meaning he would score just two points and head into the final round with a 14-point lead over Ilott.

But Shwartzman was untouchable, taking his fourth win of the year ahead of Mazepin and Deletraz. Armstrong held fourth ahead of Zhou and Lundgaard, with Schumacher seventh. Saturday’s winner Drugovich had a quiet race, finishing where he started in eighth.

An intriguing weekend in Bahrain for the Formula 2 championship, with Ilott closing in on Schumacher, but with the PREMA driver still the clear favourite with that lead.

Mazepin, Shwartzman and Tsunoda are still mathematically in the hunt but it is very unlikely they can take title glory.

In the constructors’ standings, PREMA remain the clear favourites thanks to their strong weekend, but UNI-Virtuosi aren’t totally out of it yet, although it would take a miracle to see them take the crown, with the deficit standing at 47.5 points.

It’s set to be another great battle in Bahrain next week on the shorter, quicker ‘Outer Loop’ and we can’t wait to see which driver and which team will take the titles…

Bahrain as always offered us plenty of overtaking to choose from. However, we loved the parting of the asphalt for Yuki as he swooped in for a cheeky double overtake in Saturdays Feature Race.

The @CarlinRacing driver went from last (P22) to P6 in the Feature Race ?#BahrainGP ?? #F2 pic.twitter.com/pHk9o4ZXNU

We would normally run a poll to select your driver of the week from the #RoadtoF1. However, this week we can only reiterate the sentiment of all motorsport fan’s with our F2 Graduate Romain Grosjean’s miraculous escape and safe return from the F1 track on Sunday.

Plus we asked you for your reactions in a GIF fro this weeks F2 action! 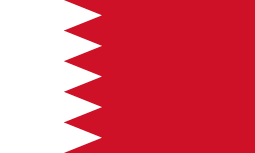 NEXT EVENT: ROUND 12 – Bahrain. (Click here to see the weekends schedule) 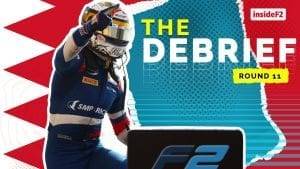