The Formula 2 Debrief – Round 6

The Formula 2 Debrief – Round 6 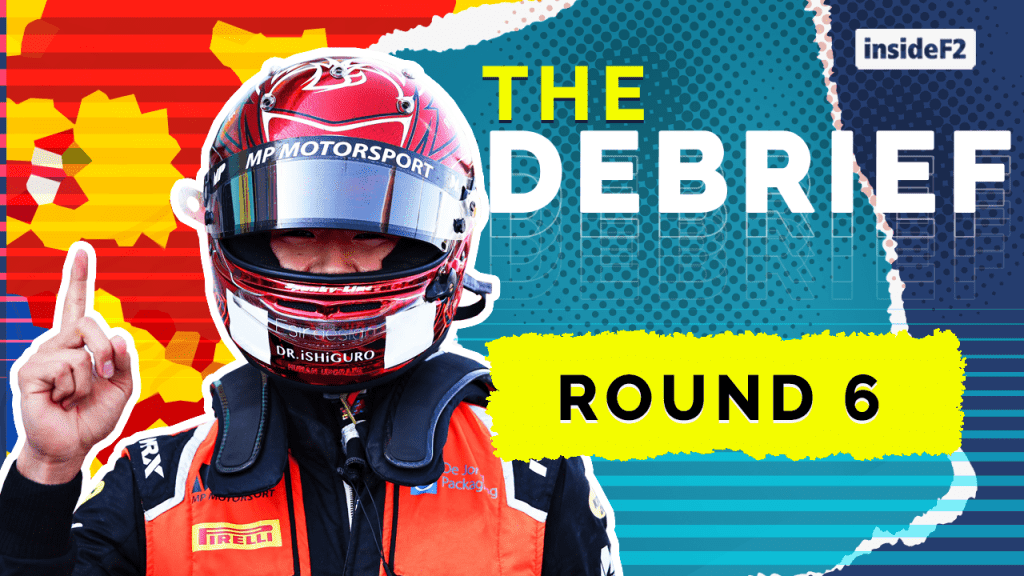 Another weekend has been and gone in this fast-paced and high-drama Formula 2 season. This weekend the circus moved to Spain and we witnessed some spectacular events.

We saw a near-impossible win, some mega battles and tyre drama in the two races, but first, let’s go back to Friday.

We arrived in Barcelona on Friday excited for round six of the 2020 Formula 2 championship. The air was hot and so was the track as the drivers left their garages for the first time.

It was Dan Ticktum who set the fastest time of the session. Ticktum was part of a group of drivers trailing the frontrunners in the standings, so a good weekend could have made all the difference. He and Mick Schumacher made the perfect start by being first and second, with Yuki Tsunoda and Louis Deletraz also showing strong pace. 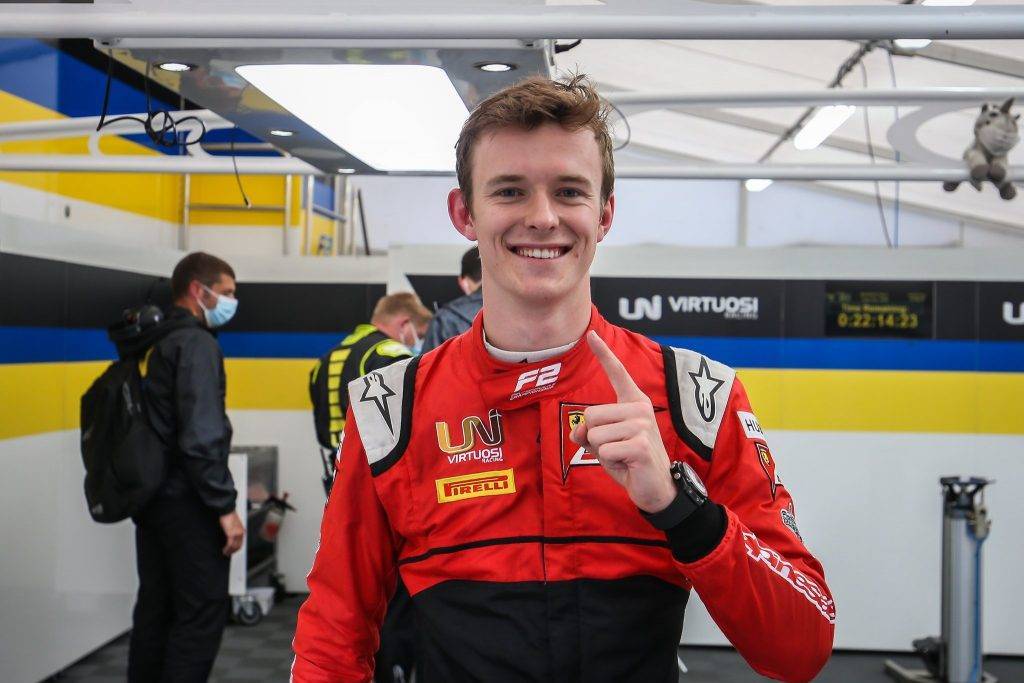 Later in the day the 22 drivers had the opportunity to score four points for pole and the ideal grid position for Saturday’s Feature Race.

Schumacher continued his form from practice and went tthird with a good lap, before Guanyu Zhou trumped him to move onto the provisional front row.

But it was their teammates who stole the show. First, PREMA star Robert Shwartzman beat everybody to go top with a tidy lap. But then, qualifying master Callum Ilott continued his Friday dominance by taking his third pole of the season.

Incredibly, Ilott has still never been outside of the top three in qualifying this season. He took the championship lead from Shwartzman in Britain and the Russian would be sitting alongside him having held second.

Felipe Drugovich prevented it being an all-PREMA and UNI-Virtuosi front row by claiming fourth, with Schumacher and Yuki Tsunoda behind. 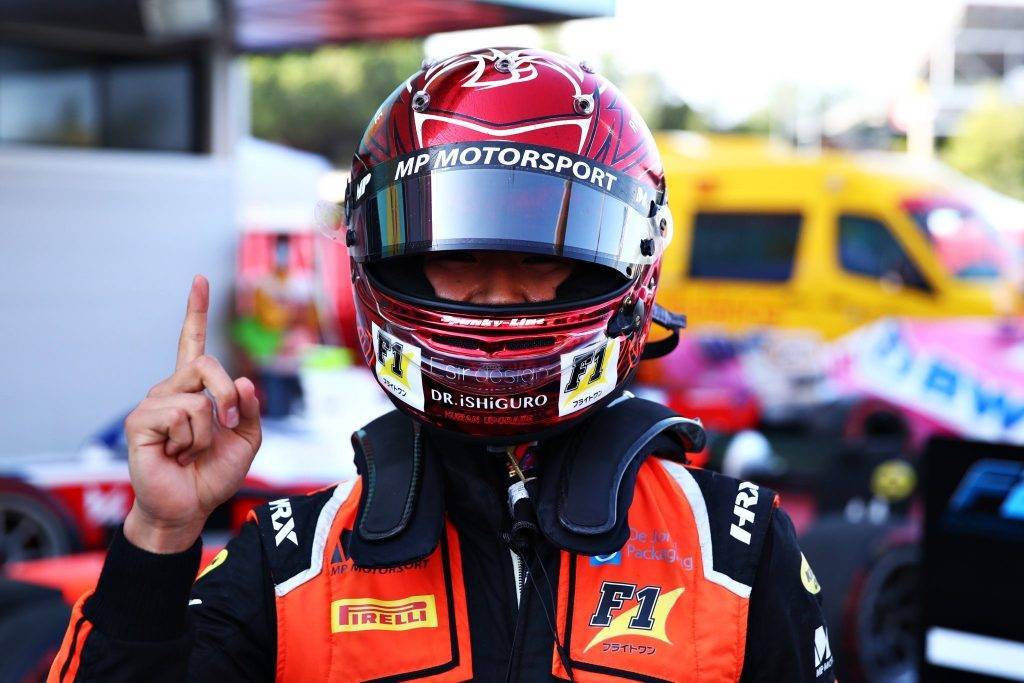 At lights out for the main event, Shwartzman got the jump on Ilott to take P1, with Schumacher moving up to third.

However, Ilott got his revenge on Lap 6 of 37, passing into Turn 1. The pair soon pitted, leaving Schumacher on the alternate strategy to lead the race.

Schumacher’s gamble to start on the hard tyres look a poor one, with the PREMA struggling and Ilott closing in.

Schumacher pitted on Lap 23, allowing Ilott to re-inherit the lead of the race. Drugovich optimistically looked for a move on Shwartzman, and made it stick for P2.

But the race was about to turn on its head as Sean Gelael and Giuliano Alesi came together. Alesi’s HWA spun and he couldn’t get it restarted, bringing out the safety car.

Nobuharu Matsushita and Nikita Mazepin used the safety car as a chance to get rid of their old hard tyres, whilst Ilott and Shwartzman pitted for a second time.

Drugovich led but was brought in the following lap, dropping down the field, leaving Tsunoda to lead on old tyres.

At the restart, it was imperative Ilott passed the slower Carlin for the lead as soon as possible.

But the Brit couldn’t find a way past and was edged out by Matsushita. With Ilott out of shape, Shwartzman took advantage to pass as well.

Matsushita then did what Ilott couldn’t, passing Tsunoda, with Shwartzman once again following through.

With the race time limit up, the safety car came in, allowing one final crazy lap of racing.

Ilott attacked Tsunoda again, leaving himself vulnerable to Mazepin behind. Despite having a five-second penalty to his name, the Russian didn’t need a second invitation and passed both Ilott and Tsunoda.

Zhou soon did the same as Ilott’s day got worse, but nothing got in Matsushita’s way, taking his first win of the season from an improbable P18 on the grid.

Shwartzman followed home for second, with Zhou inheriting third after Mazepin’s penalty. The Hitech’s five second drop saw him lose multiple positions and dropping out of the points.

Tsunoda held Ilott off in the end for P4, with Schumacher closing in but finishing sixth. Drugovich and Ghiotto were P7 and P8, securing second and pole for Sunday’s sprint race. Ticktum and Louis Deletraz completed the top ten of a quite ridiculous race.

On the final lap Gelael hit a sausage kerb whilst battling with Jack Aitken. The hefty landing hurt the Indonesian and he was taken to hospital with a fractured vertebra. Gelael missed Sunday’s Sprint Race and we all wish him a speedy recovery. 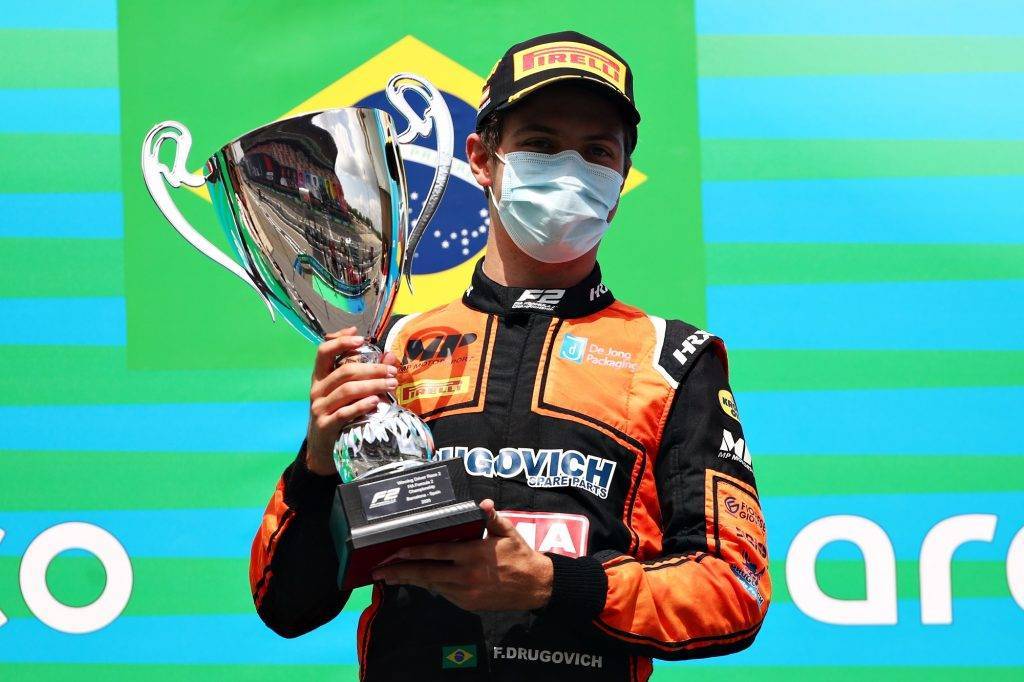 Sunday’s race had plenty to live up to after the drama of Saturday, but the Sprint Race was more about tyre management than anything else.

Drugovich started well, passing polesitter Ghiotto into Turn 1. Behind them Ilott was able to work his way around Schumacher for third with a daring move around the outside.

Ghiotto defended from Ilott, allowing Drugovich to extend a huge lead at the front.

The championship leader made his move, going to the outside at Turn 1 again. But unlike Schumacher, Ghiotto wasn’t having it, closing the door firmly.

That was Ilott’s chance gone as he dropped back into the clutches of Schumacher, who passed when Ilott’s tyres began screaming for help.

Almost at the same time, Zhou picked up a puncture and was forced to pit, dropping way down the order.

Shwartzman also came in for new tyres, out of choice with the Russian already struggling down the order.

Staying out was Ilott, but his tyres were now so ruined he was being passed at every opportunity.

He fell to eighth before Christian Lundgaard made a move at the final chicane. The Dane made it stick, but went off the track in the process, incurring a five-second penalty and losing the position.

Nobody could stop Drugovich though, as he made it a double for MP Motorsport. Ghiotto and Schumacher joined him on the podium, ahead of Tsunoda, Mazepin and Matsushita.

Pedro Piquet scored his first Formula 2 points with seventh, ahead of a relieved Ilott.

It wasn’t the best weekend for any of the drivers in the lead group in the title hunt, with Shwartzman having the best of it.

His 18 points see him jump Lundgaard for second, behind Ilott in the standings. Ilott has 121 points, with Shwartzman 18 behind.

A pointless weekend for Lundgaard sees him left behind on 87, with Tsunoda, Schumacher, Zhou and Mazepin close behind.

In the constructors’ standings, PREMA closed the gap to UNI-Virtuosi by six points, with 15 the new gap. A super weekend for MP Motorsport sees them more than double their points tally, allowing them to jump Carlin for fifth in the standings.

Another great Formula 2 weekend has come and gone and the drivers and teams get a well-earned break before we return in two weeks in Belgium.

We seem to say this every time Formula 2 race, but the unpredictability showed it’s beautiful face once again.

Even when it’s looking like a done deal, one small thing can change a race completely, and don’t we love it!

This week we had a tough decision! It came down to one of two great moves. Both send’s have merit for different reasons.

Ultimately, the move that missed out need’s a shout out. Nikita Mazepin pulled off a super brave move with two wheels on the grass at full speed down the main straight into turn one. It was a brave move and fully deserving of the mention.

However, we eventually opted for a move that required speed of thought and the skill of a master craftsman to fit a Formula 2 car into the space of about 1.3 car’s as he threaded his Trident in between Aitken and Armstrong at the final chicane.

You #GotItSent Roy Nissany! The second wasn’t to shabby either 🙌🏻

This week see’s our social podium dominated by the dominant MP Motorsport team! What a great weekend for the Dutch team! 🇳🇱

we went from happy dances to happy tears in 24 hours

A great post from MP, which emphasises that Formula 2 is everything Formula 1 want’s to be!

Everyone who didn’t watch the race be like https://t.co/zwEFlZILhq pic.twitter.com/9K8yQN6nsl

Our winner had to be the MP Motorsport’s rodeo master as Nobuharu Matsushita crossed the line! 🕺🏻🥳 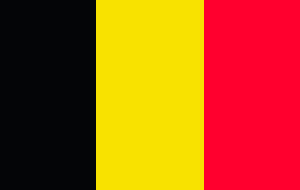 NEXT EVENT: ROUND 7 – Spa-Francorchamps, Belgium. (Click here to see the weekends schedule) 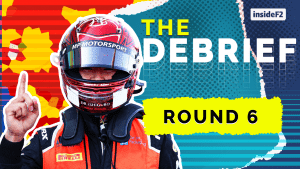