The Perfect Start for Ticktum in Silverstone Practice

The Perfect Start for Ticktum in Silverstone Practice

Dan Ticktum came out on top in a disrupted Practice session at the fourth round of the FIA Formula 2 Championship in front of his home crowd, with Oscar Piastri then Yüri Vips making up the top three.

After a messy weekend last time out in Azerbaijan, the Williams development driver will look to capitalise on his early pace this time and carry this momentum through a clean weekend to boost his title challenge.

The Practice session was interrupted by two red flag periods caused by Théo Pourchaire’s early crash and Alessio Deledda’s spin with 20 minutes left in the session.

The F2 cars took to the track to soak up the British sunshine which greeted the fans on their welcome return to Silverstone, with a record 140,000 spectators expected across the weekend.

Théo Pourchaire found the barriers on the exit of Brooklands early on in Practice, with a snap of oversteer spinning the 17 year old out across the grass and into the barrier. The young Frenchman seemed unscathed after only a relatively light impact, with minor damage to his ART Grand Prix car.

The Sauber Junior driver was easing himself back into racing after having sustained a fractured arm in a crash during the Baku Feature Race. He had been passed fit to drive but may still have to manage the pain while driving, and will hope that this incident has not hindered his recovery.

His team mate Christian Lundgaard also seemed to be struggling, correcting a slide going through Abbey and running wide moments before Pourchaire crashed and brought out the red flags.

After the first red flag period, the drivers got the opportunity to warm the tyres back up and set more representative lap times, with Lirim Zendeli going to the top of the timing screens before being demoted by Yüri Vips.

The Estonian will be trying to build on his immense success last time out in Baku, where he became the first Formula 2 driver to win twice on the same weekend, as he soared into championship contention.

A flurry of times then followed, with rookie Oscar Piastri moving to the head of the field, before a second red flag period caused by Alessio Deledda’s spin, with his HWA Racelab car coming to a halt and stalling at Club Corner, causing a second stoppage with 20 minutes left in the session.

The Alpine Academy driver went faster still as the drivers returned to the track with Ticktum slotting in behind the Australian.

Championship leader Guanhyu Zhou had a quiet middle part of the session before going P6 later on. He saw his lead in the overall standings greatly diminished at the last round in Baku, and will hope to put up a strong defence of his position this weekend.

David Beckmann’s big wiggle on the exit of Copse prompted a sharp intake of breath from the commentators, demonstrating how hard the drivers were pushing to find the limits of their cars in what little time remained in the session.

Ticktum went purple in the first two sectors at the close of the session to take top honours from Piastri. Behind, Vips had a messy final run, going wide through Copse and sliding through Maggots and Becketts on his way to a P3 finish.

Richard Verschoor also had a big moment at Club corner as he tried to get all the performance out of his MP Motorsport car as the session concluded.

After such a disrupted Practice session, the drivers will need to be on top form to get the most out of their cars as the action continues in this afternoon’s Qualifying session.

Make sure to look out for all the Formula 2 news on InsideF2 across what is set to be a great weekend of racing around Silverstone! 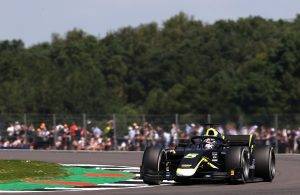