Hugh Barter says his Spanish F4 event at Aragon was “a really good weekend” after taking a double victory and a third place.

Barter explained to InsideF2 that his race weekend was enjoyable and he didn’t endure the shortcomings from the previous round at Valencia and Spa.

He said: “This weekend was obviously a really good weekend for us coming away with two wins and a third.

“At Valencia and Spa, I think we also had the pace to be winning there. At Valencia, there were a few mistakes on my side of things and at Spa, we just didn’t really get the job done.

“I guess you could say there were some very close battles with Niko [Tsolov] and honestly it was just the same this time but roles reversed so I was very confident coming into the weekend and I don’t think something clicked.

“I think it was just that everything just fell into place and went how we wanted it to.”

The Campos Racing driver has performed admirably in 2022 and said that he has a great relationship with his engineer and is hopeful that can continue for the rest of the season.

“I wouldn’t say the team and I have evolved I think what has changed is that we’ve built a really good relationship.

Aragon was incredibly hot over the weekend, despite the warm temperature managing the tyres wasn’t a big concern for Barter.

Tyre management wasn’t so much of an issue this round. I was surprised at how low the deg was considering how hot the temperatures were, they weren’t extremely hot but it’s a bit more than what you would like and we came into the weekend expecting more rear tyre deg, especially after the test that we had here last time.

“But instead we had a lot of front deg if anything and so we spent the majority of the weekend trying to solve these issues and by the end, it seemed like everything was good and by Race 3 it seemed to click

“But it was more us finding what the issues were and what we need to change and it falling into place for the last race.”

The Australian driver will race at Ledenon next on the 9-11th September in a bid to continue his assault on the French F4 championship. 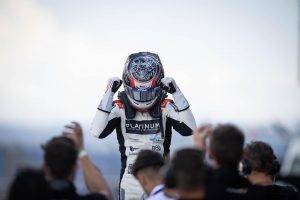