Hunting down the race leader in the closing stages of the FIA Formula 2 Monza Feature Race, Dan Ticktum secured third place on the podium, on his fresh soft tyres.

The British driver started the race on an alternative strategy, after he qualified in eighth place on Friday. The field ahead were on softs, while the Carlin driver started on mediums.

Dropping to P9 on Lap 1, he gained his original position back and maintained it until Jüri Vips had a problem and Ticktum made contact with him. His car appeared undamaged and he continued on course.

“I thought I’d damaged my front wing when the car in front of me broke down and stopped at the chicane.”

The second Safety Car triggered an invasion of the pits for tyre changes, some teams double stacking. Ticktum stayed out and took the lead of the race. The Carlin driver now had to play the long game and stay out as long as he could in the hopes there would be another full Safety Car, giving him a free pit stop.

11 laps later he got his window when Liam Lawson came to a stop on track, after his cockpit fire extinguisher accidentally deployed.

Ticktum darted into the pits for the softs that would play out Carlin’s alternative strategy, and he cut through the pack after emerging from his stop, in P11.

There was a heart stopping moment for Ticktum’s supporters as a message flashed up that he was being investigated by race stewards for an incident between himself and Swiss driver, Ralph Boshung, who tapped the Carlin car and forced Ticktum onto the escape road.

Much to the relief of team and driver, the investigation went no further.

“I got hit after the last Safety Car restart and it was pretty scary. I had to cut the chicane. There was a little bit of damage but I was able to keep going.”

In the five remaining laps Ticktum gained eight places, and looked set to catch a scrapping Oscar Piastri and Guanyu Zhou, to take the win of the Monza Feature Race.

The Safety Car that brought him the luck he needed to take advantage of his alternative strategy also spoiled his chances of the race win. It was once again deployed for a final incident and the race finished with Ticktum in third place.

“I just wish that last Safety Car didn’t come out. I think it would have been difficult to get them both of them in two laps, but I definitely could have got second.”

“I should have scored at leat 30 points this weekend. But, I’m in the top three of the championship and I’m going to stop worrying too much.”

This season the Brit has finished at least once on the podium every race weekend. The only other two drivers who have achieved this are the two championship leaders, Piastri, and Zhou.

Despite this Ticktum is remaining both hopeful and realistic.

“I’m still in with a chance even though it will be tough. If you have a strong weekend and score over 40 points you’re pretty much there. But the gap to Oscar is pretty sizeable now. Three races is time but it’s not enough.”

“Where I am in the championship is reflective of myself and where the car’s been, but I’m never going to give up.” 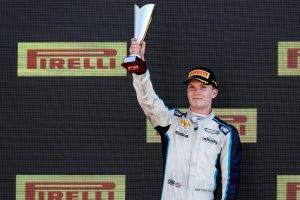