With temperatures reaching a scorching twenty-eight degrees and track temperatures hitting forty-four degrees, the twenty-two drivers would have to see how their Pirelli rubber would react to the warm weather as well as the Circuit of Catalunya’s mixture of slow, medium and fast corners.

The initial laps were conducted on hard tyres at a rather pedestrian pace with PREMA’s Robert Shwartzman setting the early pace before throwing down a marker to his rivals with a time of 1.31.553.

The Russian’s time was quickly beaten however with his PREMA’s teammate Mick Schumacher posting a time of 1.31.275 before Felipe Drugovich, Artem Markelov, Jack Aitken and Giuliano Alesi quashing the German’s time as all four drivers managed to post 1.30s with Drugovich fastest with a 1.30.107, four-tenths quicker then Markelov.

Roy Nissany’s busy morning continued as the Israeli struggled to re-adapt himself to the heavier Formula 2 cars after a morning practice session in Formula 1 replacing George Russell in the Williams with Nissany having an excursion at turn seven.

Schumacher went fastest again as the German driver set a lap time of 1.29.669 despite a sluggish third sector from the PREMA driver with Yuki Tsunoda and Louis Deletraz also setting 1.29s to join the German in the top three.

The hard tyres were proving difficult to handle in the heat with both Drugovich and Aitken both going off the road with the Brazillian off on the entry to turn four whilst Aitken went wide into the turn thirteen chicanes as the Brit-Korean wrestled his Campos around the Circuit De Catalunya circuit.

Tsunoda’s rapid pace was briefly halted as the Japanese driver stalled his Carlin when attempting a practice start at the end of the pitlane, luckily for the Honda junior his Carlin team ran down to the pits with the starter motor to get him fired up once again, with Tsunoda getting his second practice start perfect.

Marino Sato’s quick session came to an abrupt end as the Japanese driver went off onto the gravel on the exit of turn four with the beached Trident failing to restart, bringing out the red flag to remove the stricken Trident.

Practice recommenced with just over five minutes to go in the session with Tsunoda once again struggling to rejoin the track as his Carlin struggled to get the car refired in the slow lane of the pit exit.

The final two minutes of the session was dominated by doing long stints on the already used hard tyres which meant no driver was able to improve as the checkered flag waved.

At sessions end, it was Ticktum with the early advantage with the fastest time of the session ahead of Schumacher, Tsunoda and Deletraz with championship leader Callum IIott and Markelov rounding off the top six.

Luca Ghiotto was seventh fastest ahead of the surprising Sato whilst Drugovich and Shwartzman just squeezed into the top ten.

Nikita Mazepin could only manage eleventh ahead of Jehan Daruvala and Guanyu Zhou with Pedro Piquet fourteenth and Aitken in fifteenth.

Christian Lundgaard could only manage sixteenth in what was a testing practice session for both ART drivers, with Sean Geleal and Giuliano Alesi following the Dane behind in seventeenth and eighteenth. 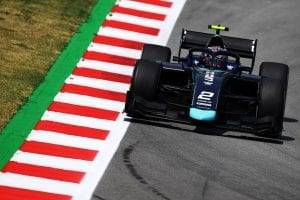