Ticktum Fastest in Practice at Monza

Ticktum Fastest in Practice at Monza

FIA Formula 2 returned after its summer break where Dan Ticktum got the second half of his season off to a dream start with the fastest time in practice at Monza.

The Carlin driver, who comes into the Italian round fourth in the championship was on the pace from the start of the session, as championship leaders Oscar Piastri and Guanyu Zhou could only manage the fifth and 13th fastest times.

As Formula 2 revved back into action after just under two months away, practice dawned on a cloudy day with temperatures at 25 degrees and set to climb.

Two drivers would be making their seasonal debut at the temple of speed, with Jake Hughes back in at HWA Racelab, replacing Jack Aitken, and Enzo Fittipaldi with his series debut. The Brazilian driver replaced David Beckmann at Charouz, who had run out of budget before the Monza weekend.

Despite the lack of funds, Beckmann is still racing this weekend after securing a seat at Campos, replacing Matteo Nannini who is, once again, without a drive in the series.

The opening seven minutes of the session were dedicated to the installation laps as the drivers warmed their tyres up and checked that all systems were working before the push laps began.

First, to set a representative time was championship leader Oscar Piastri, who set a 1:35.095. Jehan Daruvala quickly beat that with a 1:34.363 ahead of Red Bull academy team mate Liam Lawson and Ralph Boschung, who was over three tenths back on the Indian.

Jüri Vips had a slight scare at the Rettifilo after locking up into the corner, causing him to go over the kerbs before heading back on track.

Ticktum was next to go quickest with a 1:33.189, with the Carlin driver under a tenth quicker than Daruvala, who lost time in the final sector despite going quickest in the first and second sectors.

Marcus Armstrong’s wretched luck continued at Monza as the Kiwi hit trouble with his DAMS after leaving the weighbridge. Boschung also had issues as the Swiss veteran stopped his Campos at the pit entry, causing the marshals and his mechanics to push him out of harm’s way.

Ticktum extended his advantage on the field on his next run, as the Brit improved his time by over a tenth. Theo Pourchaire was also moving up, grabbing the second quickest time with a 1:33.267, though still over two tenths down on Ticktum.

At the session’s halfway point, Ticktum led Pourchaire and Daruvala. Beckmann was going well in his first outing for Campos with the fourth quickest time ahead of championship leader Piastri and Marino Sato.

Armstrong’s session came to an early end with the Ferrari junior out of the car as his DAMS developed a technical issue. The Kiwi ended the session without a representative time.

Things got worse for DAMS a few minutes later when Roy Nissany’s engine blew up on the run down to the Parabolica, ending the Israeli’s session with just under ten minutes on the clock. The failure brought out the Virtual Safety Car, which ended with seven minutes left in the session.

Alessio Deledda found himself in hot water with both Vips and Zhou after locking up into the Rettifilo and blocking the pair, hindering their laps in the process.

Despite Pourchaire’s best efforts, Ticktum ended the session quickest ahead of the Frenchman, with Daruvala not far behind in third ahead of Beckmann, Piastri and Sato.

Christian Lundgaard was seventh quickest ahead of Dutch duo Bent Viscaal and Richard Verschoor and Liam Lawson, who rounded off the top 10. 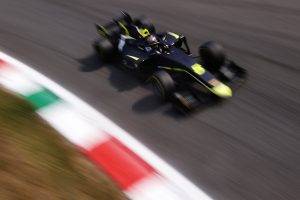