Dan Ticktum says he is grateful for the opportunities DAMS have given him, despite not being able to convert pole to Sprint Race victory today.

The British driver started on reverse grid pole and managed to hold on to the lead for a long time whilst duelling with Jehan Daruvala.

However, the Carlin driver was able to pass him on Lap 25 after Ticktum’s tyres began to drop off, having struggled with his rear tyres earlier in the race.

Speaking after the race, the DAMS driver told an interesting anecdote from his karting days and how he managed to hold Daruvala behind him for so long.

He said: “I have to say it just reminds me of many an argument I had with my father when I was in karting and I was much younger, where we would refuse, basically, to go with a top team and pay however much money it was for a go-kart – huge money, I won’t say numbers.

“So, we went to a team that we thought would benefit me more mentally in the long run. And there was a couple of seasons where I just had no power. I’d managed to qualify alright, but then I’d just have to defend for the entire race.

“I don’t think many people would have been able to defend for that long to be honest, without tooting my own horn or anything. I actually enjoyed it, defending. I just had no pace!”

The Williams Academy driver tried to slow down into the final lap and go behind Yuki Tsunoda in order to utilise his DRS and passed him into Turn 1.

However on the final corner, Ticktum was overtaken by the second Carlin of Tsunoda and crossed the finish line in third.

Describing the final couple of laps, he said: “Exit of Turn 2, the little kink, and exit of Turn 8 with a bump, I just got no traction so there was nothing I could do. Then, as soon as the rears start to get a bit hot then you rear lock a bit.

“Then you put the brake bias forward. Then you start to lock the fronts. Then you get a flat spot. Then you’re completely screwed.

“I did everything I could. It’s annoying that I locked up in the last corner, but I just had no grip.”

However, he remained grateful for the work of the DAMS team this year, after facing an uncertain future when he was dropped from the Red Bull junior programme last year.

He said: “It’s been a very tough year with DAMS. I’m happy to get them a podium, but obviously it’s not where they want to be, and not where they should be, let’s say.”

The Brit’s thoughts now turn to the 2021 Formula 2 season and he is expected to feature in the post-season test in Bahrain next week. However, no announcements have been made as to what team he will be joining. 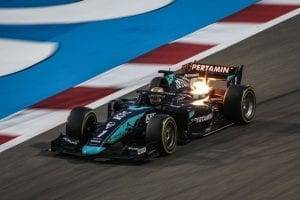