It might not have been Dan Ticktum‘s first FIA Formula 2 podium this year, but he certainly felt very fortunate to have finished P2 in the second Monaco Sprint Race.

A throttle motor failure on the way to the grid saw him nearly fail to start the race, while a stunning move on the wet side of the Nouvelle Chicane allowed him to snatch second from PREMA’s Oscar Piastri.

However, he made contact with the wall prior to the Safety Car being deployed on Lap 25, forcing him to finish the race with damaged steering.

Despite his previous experience at the Principality, the shine in one of the jewels in Motorsport’s Triple Crown hasn’t dulled for the Carlin driver.

Ticktum said: “Just being able to race here, I feel like a very lucky person to be honest. Being able to drive around this circuit in a 600hp formula car is very, very special, so I feel very privileged.”

Considering many of the Formula 2 grid this year have never raced on the streets of Monte Carlo, the Williams Academy driver is somewhat of a veteran, having made his debut there in Formula Renault Eurocup back in 2017.

With little time to rest, thoughts now turn to the Feature Race and after qualifying in P4, Ticktum is hungry for success.

However, the change to dry conditions means that opportunities will be scarce, and 21-year-old underplayed his chances of victory this afternoon.

Ticktum said: “Unfortunately, I think it is going to be more of a classic Monaco, wherever we start is sort of wherever we finish. Yeah we’ve got pitstops, but I think most people’s strategies are going to be relatively in line with each other.

“If you try and do something crazy and pit really early, you are just going to come out in traffic. I think measured aggression at the start and then hope some people make mistakes in front of you.”

Getting to reign victorious in Monaco is an honour all drivers want, but few will ever experience, so expect to see battles galore as the FIA Formula 2 Championship battles heats up!

Will Dan Ticktum be F2’s Mr Monaco this afternoon? 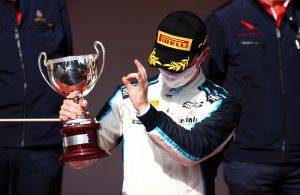