Dan Ticktum was invincible in Italy to take a dominant win in the Formula 2 Sprint Race this morning.

Starting second on the reverse grid, Ticktum surged forward to take the lead from Louis Delétraz into the first corner. From then on the DAMS driver never looked back. With battles galore behind him, Ticktum was able to build a gap to those behind him and control the race.

After Felipe Drugovich was clipped by the Trident of Roy Nissany and spun to a halt, Ticktum will have been grateful that the incident only resulted in a Virtual Safety Car and not a full Safety Car. As a result, he was able to maintain the 5 second gap going into the closing stages after a clean getaway at the restart.

He finished nearly 4 seconds ahead of second-place Callum Ilott, who has managed to retake the championship lead from fellow Ferrari Academy driver Robert Shwartzman.

In a rather bizarre incident after the chequered flag, Ticktum was driven to parc ferme in the medical car after he was forced to stop his DAMS car on track.

Speaking about his performance so far this season, the Brit said: “It has been a very up and down season so far, but I think we have consistently been moving in the right direction and I think we are nearly there. You can always be better, but I feel like the car is a lot closer to the window now – or perhaps even in it.”

“I would like to win a Feature Race, I said that in Silverstone, but a win is a win. The big positive is the pace that we have in the car. We will see what Qualifying is like next week and hopefully I’ll be on top in the other race.”

This is the rookie driver’s second Formula 2 win this season and the Williams Academy driver has provided the perfect send-off for the Williams family’s final weekend in Formula 1. Celebrating his win on Twitter, he said:

Yesssss! Win number 2! ? I am dedicating this win to @WilliamsRacing, it has been an honour to be a part of this team while the family has still been in charge. Thank you for your belief in me, I feel privileged to have carried their name this year so far.

Round 9 commences next weekend and sees the drivers head to Mugello. This is the first time the main Formula 1 feeder series has held a race around the Autodromo Internazionale del Mugello since the 1997 International Formula 3000 Championship. Ticktum will be hoping to continue close the gap in the championship after jumping above Louis Delétraz to eighth place in the drivers’ standings. 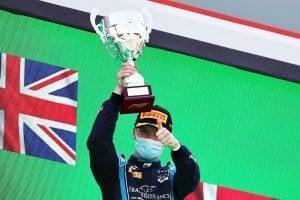