Dan Ticktum took his first Formula 2 victory at his home event after a superb race. Ticktum held the lead for every lap and held off the charging Christian Lundgaard on the final lap.

Lundgaard may have won the race with another lap, having pitted for new tyres under the safety car, caused by a spin for Callum Ilott.

They were joined on the podium by Louis Deletraz after a nightmare race for UNI-Virtuosi, who had both Ilott and Guanyu Zhou spin out of solid points positions.

Ticktum got the start he wanted, holding the lead into Turn 1. But it wasn’t the greatest start for the man alongside him, Felipe Drugovich. For the second time this weekend, Drugovich lost places on lap one as he was overtaken by Lundgaard and Deletraz.

It was a disaster start for Yuki Tsunoda, following an excellent podium on Saturday. Starting sixth, the Japanese star was battling with Ilott into Village, but the pair touched and Tsunoda spun round. Ilott was left frustrated after being given a five-second time penalty for the incident.

The Brit knew he had to start making moves to account for the penalty, and quickly passed Drugovich for P4.

He was followed through by UNI-Virtuosi teammate Zhou, who passed both Nikita Mazepin and Drugovich on Lap 8 with a stunning double overtake into Stowe.

The Norfolk team seemed to be the pick of the bunch once again, but they couldn’t make the best of their speed. Ilott took advantage of the pace by overtaking Deletraz and Lundgaard in quick succession for P2 on track.

The Ferrari Academy Driver was chasing Ticktum for the lead when he spun on the exit of Club. Ilott was looking to close Robert Shwartzman’s championship lead but was forced to retire after his mistake.

The incident brought out the safety car, and Lundgaard took a gamble to give up P2 for new tyres.

The Dane set about his fellow Renault academy driver Zhou, passing him into Brooklands on the penultimate lap for third.

On the final lap Lundgaard passed Deletraz in Sector 1, but the one-second gap to Ticktum was just too much.

Set for P4, Zhou lost it and spun through the Maggots and Becketts complex. The Chinese driver dropped down to ninth, out of the points.

There was final corner action as Jehan Daruvala snatched fourth from Mazepin at Club, his best finish of the season.

Championship leader Shwartzman had a nightmare weekend. The Russian looked to be closing on the lower end of the points, but a pit-stop disaster saw him finish down in 13th. 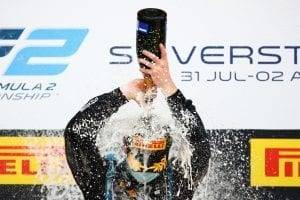