Dan Ticktum navigated the tricky conditions on a drying Sochi circuit to win the delayed Sprint Race 1 in the Round 6 of the FIA Formula 2 Championship ahead of Jüri Vips and Robert Shwartzman behind.

The Carlin driver lined up on pole position after qualifying 10th in yesterday’s Qualifying session. He retained his lead from the race start under the Safety Car to the chequered flag.

The Brit won by a healthy 4.5 seconds, and looked comfortable throughout the race, never putting a foot wrong on a day where several drivers fell victim to the conditions.

Home favourite Shwartzman took an excellent P3 and 10 championship points  on a day when the current points’ leader failed to score points. He was closing the gap to Guanyu Zhou when the Chinese driver spun on the way to the grid but retains second place overall.

There was plenty of action well before the race start, with the day’s running disrupted by torrential rain in the morning. Sprint Race 1 was postponed until the afternoon, with Sprint Race 2 cancelled.

That left us with a single Saturday Sprint Race and a Sunday Feature Race, just like last year’s format, and the same as the newly proposed 2022 F2 weekend format.

The drama kicked off as soon as the cars left the pits, with Zhou spinning around on the lap to the grid and stalling the engine.

The driver who started the weekend second in the championship standings, just 19 points back from Oscar Piastri, would not take the start of the race, doing his title ambitions no good at all.

His team mate Felipe Drugovich also lost control on the slippery track on the way to the grid, and speared into the barriers, damaging the front of his UNI-Virtuosi car. The Brazilian was not able to start the race.

Both accidents demonstrated the treacherous conditions on the circuit as the racing line dried, with very little grip to be found off-line.

The race began with a rolling start, with the Safety Car pulling in and Ticktum controlling the pace before leading the field away. The Brit launched in the final sector, trying to create a gap to the cars behind.

The drivers were very conservative at the start, unwilling to risk running onto the wet line. Lundgaard overtook Armstrong in the middle sector on Lap 1 to move into P10 thanks to Zhou’s DNS.

Vips was all over the back of Ticktum at the start but could not risk a move on the brakes on the wet track, with only space for one car on the dry racing line.

A rare calm ensued as the drivers were uncharacteristically well-behaved, forced into single-file around the narrow Sochi circuit, without the assistance of DRS down the main straight and the back straight.

The lap times slowly reduced as the drivers built their confidence, and prepared themselves to take advantage of any mistakes.

Bent Viscaal brought out the yellow flags in Sector 3 before a Virtual Safety Car was deployed on Lap 5  for the marshals to recover his stricken Trident car, after the Dutchman spun on the exit of the Turn 15/16 chicane.

Seconds earlier, Ralph Boschung had demonstrated his car control skills to catch a huge moment of oversteer as he put down the power on the exit of Turn 14.

The Virtual Safety Car ended on Lap 6, as Piastri reacted quickly, but ran wide in his attempt to take seventh position from Jehan Daruvala. The championship leader was immediately overtaken by Lundgaard who moved up once again.

Piastri ran wide again a few corners later and then tumbled down to 12th as he struggled to take advantage of his title rival’s misfortune.

Just a few moments later, Liam Lawson hit the wall and damaged his rear suspension as he struggled to get his Hitech car stopped into the heavy braking zone of Turn 13, bringing out the Virtual Safety Car once again.

As the Virtual Safety Car ended at the start of Lap 9, Boschung was slow to react, as Théo Pourchaire took advantage to move up a place, while Daruvala overtook both drivers to take P5 as the Swiss driver lost two places.

Shwartzman briefly lost third place to Jake Hughes on the back straight before reclaiming the podium position on the brakes going into Turn 13.

Vips set the Fastest Lap at the end of Lap 11, scratching into Ticktum’s three-second lead at the front of the race.

Boschung was looking in his mirrors once again as he came under pressure from Lundgaard behind. And the Swiss driver locked up into Turn 2 but managing to retain seventh place.

The Campos driver repeated his lock-up on Lap 15, getting worse the flat-spot on his front-left Pirelli tyre which takes such punishment on this clockwise circuit.

Having worked his way up from P9 on the grid to P5, Daruvala spun on the exit of Turn 16, spinning up his rear tyres as he ran over the exit kerb and dropping down to 12th position.

The Indian driver would be investigated for an unsafe rejoin as he turned around in front of upcoming cars.

Pourchaire finished with the Fastest Lap of the race, taking an additional two points on top of his six points for the fifth-placed finish.

Ticktum took the chequered flag in a commanding display in front of Vips and Shwartzman behind, with Hughes taking an excellent P4 for the HWA Racelab team.

Piastri will be ruing the missed opportunity to capitalise on Zhou’s DNS, but will hope to convert his pole position from Friday into a Feature Race victory on Sunday. 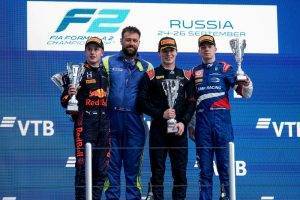