An unexpected title challenge is on the cards for Jüri Vips following his second FIA Formula 2 victory in the Baku Feature Race.

The Hitech driver has catapulted himself into championship contention, after his two victories and an eighth-placed finish saw him go from 10th to fourth in the drivers’ standings.

Vips’ unfortunate run of luck at the start of the campaign has meant this has come as somewhat a surprise, not at least to the Estonian driver himself.

“It’s quite crazy to think that because I think in Bahrain, we could have been very, very high up in the championship if it was a normal weekend for us, but everything just went wrong and we scored zero,

“To be fourth in the championship this early on I really didn’t expect, especially because I don’t think Monaco really went to plan as well. It’s definitely very positive.”

Victory this weekend has seen him become the first driver of the Formula 2 era to win two races in the same round. Despite this, he still believes there is work to do to improve his consistency across the remainder of the season.

“I’m a perfectionist, but I wouldn’t say it was perfect. We were second in Quali and I made some mistakes in Race 1.

“Honestly it was a massive step forward. The pace has been good all year, and was the same here. We didn’t capitalise on the opportunities in the first two rounds like here.

“I hope it’s good momentum that I can carry on to the next rounds.”

A relatively incident-free race compared to Sprint Race 2, the streets of Baku were without its share of drama, with pole-sitter Liam Lawson and second-place Oscar Piastri both receiving penalties.

Nevertheless, Vips remarked that it was not plain sailing for him either, as he could not afford to get too complacent following his Lap 1 overtake on team mate Lawson.

“I actually had two moments, one into the castle chasing one of the backmarkers. I nearly put it into the wall there and I had a bit of a moment into Turn 1 as well, but otherwise was just perfect.

“After I heard that Piastri has a penalty, for sure I took it a little bit easier. But at one point when I saw that I was getting a little bit too relaxed, I always had six-seven tenths margin, so I just pulled a gap.”

The Red Bull Junior now heads into Round 4 at Silverstone next month 15 points behind UNI-Virtuosi’s Guanyu Zhou.

He will be hoping to replicated his 2019 Formula 3 victory there, with the championship battle narrowing down as the season approaches the halfway mark.

Will Vips’ strong run of form continue at Silverstone? 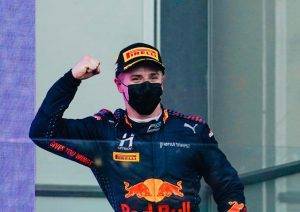