Formula 2 have raced on a plethora of top class circuits providing supreme wheel to wheel battles across the world.

The series has utilised old classics such as Spa-Francorchamps whilst newer venues including the Baku City Circuit have quickly cemented a place on the F2 calendar.

F2 have used a wide variety of tracks such as the ultra-quick Monza and the slow, technical Hungaroring making FIA Formula 2 highly competitive year after year.

The FIA F2 calendar has changed drastically since 2005 but which are the 10 best circuits to have been graced by Formula 2?

Kicking off this list is the Algarve International circuit in Portugal. The circuit briefly featured on the GP2 calendar in 2009 and created some great racing during the final round of that season.

Turn 8 at Samsung has proved to be an incredibly technical section of the track due to the tricky braking zone and it’s sudden incline on the exit. The drivers then plant the power on a completely blind crest as the track flows over the brow of the hill.

Algarve includes a mix of high and low speed turns making it a stern test of driving skill which pushes the driver to the limit.

Germany’s most famous circuit produced it’s fair share of memories in GP2 during the Nürburgring’s intermittent stint on the calendar from 2005-2013.

The 15 turn circuit has been won at by some of motorsports greats in F1’s chief feeder series. Heikki Kovalainen took victory for Arden International in 2005 on his way to second in that years championship.

Lewis Hamilton and Nico Hülkenberg both enjoyed double victories in 2006 and 2009 in top class performances prior to winning the GP2 crown.

Nürburgring features an array of high speed turns including the Michael-Schumacher-S a stunning section of track that requires plenty of bravery from the driver. The car climbs uphill through the Eifel mountains as the Michelin-Kurve beckons.

Similar to Algarve, Nürburgring holds a wide variety of turns including the downhill Turn 1 at Haug-Haken which is cambered at the apex.

The circuits final turn the Coca-Cola Kurve is deceptively difficult with gravel on the outside before heading onto the long pit straight.

Formula 2’s annual trip to Hungary is an event that creates some fantastic racing on the circuit.

The 14 turn track missed out on F2 in 2021 but will return in 2022 as part of a record breaking calendar for the series.

The Hungaroring has become an integral part of the calendar creating some great memories. Luca Ghiotto famously won in 2020 after hunted down by Britian’s Callum Ilott on much fresher tyres.

Turn 1 has been the scene of most of the passes in Hungary with DRS on the main straight allowing for drivers to lunge up the inside.

Turn 4 is the quickest turn on the circuit with a blind apex before the track winds its way through the middle sector.

The Hungaroring is incredibly twisty making qualifying critical over the race weekend. The middle of the lap does provide a high speed section, a challenge which many drivers relish.

Straights are few and far between at the circuit making the Hungaroring relentless and a tough physical challenge for the driver.

Italian driver Antonio Giovinazzi dominated the Feature Race in 2016 for PREMA finishing ahead of Sergey Sirotkin.

The 3.445 mile circuit appeared on the GP2 calendar on three occasions as the series shadowed Formula 1.

Sepang is home to some fantastic high speed turns that give the circuit a real sense of character. The double right hander at Turns 7 and 8 named the KLIA curve are crucial for lap time to keep up the momentum.

Turn 13 awaits further round the lap and has caught out a number of drivers over the years. British driver James Calado ran wide during qualifying in 2013 losing him pole position to Stefano Coletti in a nail biting duel.

The Baku City Circuit is a relatively new addition to the F2 calendar having debuted in 2016. The track has already given us some memorable moments in it’s brief tenure in the championship.

Baku in Azerbaijan is fast and flowing but an absolutely brutal track that has caught out some of the best drivers in Formula 2.

Chinese driver Guanyu Zhou had a sub par record in F2 picking up just one podium during his two visits to the street circuit.

The 2021 F2 champion Oscar Piastri endured a chequered weekend in Baku retiring from Race 1 before claiming a solid P2 in the Feature Race.

Antonio Giovinazzi dominated in 2016 winning both races on the streets of Baku in a peerless weekend for the Italian driver.

The circuit is home to one of the most challenging turns on the calendar in Turn 8. The track is just  7.6 metres wide at Turn 8 as the cars thread their way past the Baku Fortress Wall.

Complete our countdown with 5-1 on insideF2.com 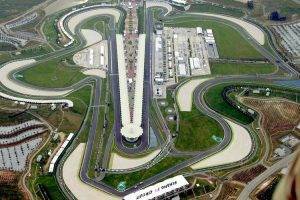