F2 has produced plenty of world class racing on some of the worlds most iconic racetracks.

The first half of this list (Top 10 Circuits: Numbers 10 to 6) included tracks that have stood the test of time and others that have more recently made their mark on the world of Formula 2.

The list was not easy to create as every circuit is unique in it’s own way and they all have their seperate challenges for the drivers.

Number five is the Bahrain International Circuit. The venue became the first Middle Eastern track to host a GP2 event in 2005 and has since become a great racetrack.

The track is incredibly technical and the long run down to Turn 1 has been the scene of many great overtakes and clumsy incidents over the years.

Turn 10 is very challenging as the drivers turn and brake simultaneously with the track falling away towards the apex.

The lap is then finished off with a series a high speed turns to end the 15 turn circuit.

Callum Ilott fell victim to Turn 10 in 2020, he clattered into Jehan Daruvala in the Sprint Race ending his hopes of landing the F2 title.

The circuit has also played host to some incredible drives from the very beginning including Nico Rosberg’s double victory in 2005 to clinch the GP2 championship.

Leclerc moved up from P14 to first place in eight laps which certainly helped to prove his credentials during his championship winning year.

Monaco is one of the world’s most iconic circuits due to it’s longevity and incredibly challenging layout which has stood the test of time.

The circuit is extremely narrow but drivers still manage to overtake 2.074 mile circuit. Drivers often dive up the inside at the Nouvelle chicane and La Rascasse which does require a certain degree of ruthlessness.

Formula 2’s oldest street circuit is also home to the tightest turn on the calendar. The Fairmont hairpin is one of F2’s most iconic turns as the drivers desperately avoid leaving any carbon fibre parts behind on Lap 1.

Monaco has served up some excellent action in recent years with Anthoine Hubert winning the Sprint Race in 2019 after a bare-knuckled duel with Swiss driver Louis Delétraz.

F2’s last trip to Monaco saw Théo Pourchaire dominate the Feature Race in 2021 in a record-breaking win for the 17-year-old.

Silverstone has become a stalwart of the FIA F2 calendar appearing in every edition of the championship since the inaugural campaign in 2005.

Lewis Hamilton’s dominant double victory was one of the highlights of the 2006 season as the ART driver scored an emphatic home win.

The track is ultra fast and features some of motorsports most fearsome turns including Copse, Becketts and Stowe.

The racing spectacle is always brilliant and the British crowd create an epic atmosphere around the circuit.

The track underwent a radical redesign in 2010 with Bridge and Priory making way for an updated Abbey and The Loop.

This changed `allowed for more overtaking as Guanyu Zhou proved In 2020. The UNI-Virtuosi driver rocketed through the field to P2 after starting in eighth place in the Feature Race.

Spa-Francorchamps is the epitome of the drivers circuit and is Belgium’s most historic track.

The flowing turns and long straights provide a tough test for the drivers over 4.352 miles in the Ardennes Forest.

Spa is home to some of the worlds most iconic turns such as Eau Rouge, Pouhon and Blanchimont which are incredibly quick and unique in their own way.

The Bus Stop chicane was reprofiled throughout 2006 which allowed for a longer pit straight and bigger pit lane.

Belgian driver Stoffel Vandoorne enjoyed a successful weekend at his home event in 2016 winning the Feature Race and claiming fourth in Race 2 for ART.

The long run up the Kemmel straight towards Les Combes is always a great opportunity to gain positions on Lap 1 due to the tremendous slipstream effect up the hill through Eau Rouge.

The Monza Circuit is steeped in history and is the oldest track on the Formula 2 calendar.

F2’s annual trip to Italy is always a highlight of the campaign as the drivers slipstream their way around the 3.600 mile circuit.

Monza is home to a series of incredibly long straights broken up by challenging chicanes that make the track so special.

The main straight is one of the longest on the calendar and combined with DRS allows for some superb overtakes into the Rettifilo chicane.

Battles often continue through Curva Grande on onto the Della Roggia chicane as drivers fight tooth and nail on the track.

The Monza circuit is the ultimate high speed challenge and Italian drivers have enjoyed a some brilliant victories in front of the Tifosi.

Davide Valsecchi won the Sprint Race on the way to the GP2 crown in 2012. In 2016 Antonio Giovinazzi and Raffaele Marciello pulled off to a spectacular Italian 1-2 finish to delight the home crowd.

What are your thoughts on the rundown of some of the great tracks in Formula 2?

Are there any tracks you would’ve liked to have seen included? 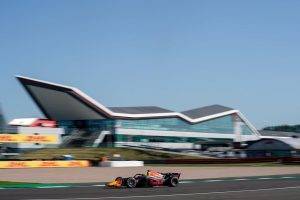