Top 10 GP2 Liveries: #5 to #1
_
With no racing going ahead due to COVID-19, many race fans have been starting to start twiddling their thumbs desperate for some good news.

We have decided to reminisce about the days when GP2 was our source of non-Grand Prix excitement.

The first half of this GP2 complication is now set (Top 10 Liveries: Numbers 10 to 6) at a very high bar for the best five liveries that GP2 saw grace the racetracks of the World.

The final five will have earned their place through the simplicity of the design, the colours the car carried and also how the car did in that seasons championship.

The list wasnt easy to produce and some may feel that I must be going insane with some of my selections but that will be up for debate.

Agree with the below? Let us know your thoughts @F2inside on Twitter by sharing this post. If you have any suggestions on those that may be missing send us a picture when you share the post of that particular car.

At number five is Isports livery for the 2012 season which was the teams last before it was before they pulled out of the sport in 2013 due to financial problems and then being renamed RT Russian Time for 2014.

The livery is subtle and clean and the red numbers give it something a bit different to the rest of the grid which may have used black or white numbers whilst the sponsors dont make too much clutter around the cars side pod and front wing.

On track Isport had a disappointing final season of racing as the team could only manage sixth in the constructors standings as Marcus Ericsson and Jolyon Palmer took a win each with the Swede getting the better of the eventual 2014 series winner in the standings by finishing eighth whilst Palmer managed eleventh.
_
Number 4 Lotus GP 2012

At number 4 we have the Lotus GP with their elegant black and gold livery from 2012.

Now dont be fooled thinking that Lotus’s was running an in-house junior team, as ART GP ran the cars for Lotus with Briton James Calado and Mexican Esteban Gutierrez at the controls.

An iconic design from the history of F1 the black and gold isnt massively in your face and has a cleaner look than the F1 cars carrying the same colours, with the simple gold numbers an extra touch of class.

That season saw Lotus agonizingly miss out on the constructors championship by six points to DAMS, whilst on the driving front Guiterrez and Calado managed five wins between them with Guiterrez finishing higher of the two with third in the standings with his reward being promotion to Formula One the following year with Sauber, whilst Calado finished fifth and was rookie of the year before staying with the team for 2013 where they rebranded back to ART Grand Prix.

Beginning our top 3 is DAMS 2005 entry which was driven By Argentinean Jose Maria Lopez and Malaysian Fairuz Fauzy.

This car wins points for a unique turquoise livery courtesy of a sponsorship deal with Malaysian petroleum company Petronas who sponsored Malaysian Fauzy which helped him take up one of the seats alongside future World sportscar champion Lopez.

Whilst the car looked the part the team struggled to keep up as they only managed seventh in the constructors championship with Lopez scoring all thirty-six points on his way to ninth in the drivers standings which included a win at Catalunya, whilst Fauzy finished the season on nil point and in twenty-fourth in the drivers standings with the Malaysian suffering the added indignity of being the only full-time driver not to score a point.

Just missing out on number one on this list is Lotus GPs 2011 effort driven by the late Jules Bianchi and rookie Esteban Gutierrez.

The rebranding was the first of two years where ART became Lotus with the first year seeing the team adopt the famous green and yellow colours that were used by the late Jim Clark and Graham Hill in the mid-60s.

The green and yellow give the car a throwback look that works well with the modern-day sponsors whilst the stripe down the middle gives the car a racier look.

On the track, the car was best remembered for Bianchis great late-race battle with Christian Vietoris at Silverstone when the pair went hammer and tongues with the Frenchman coming out on top in what was his only win of the season whilst en route to third in the championship whilst Gutierrez took a win at Valencia as he completed his rookie season in thirteenth.

But at number one is undoubtedly in my view the best GP2 livery, its ART Grand Prixs 2005 challengers driven by future World Champion Nico Rosberg and Bathurst 1000 winner Alexandre Premat.

Despite it having very little colour the simple combination of white and red blend beautifully together along with the mid-90s style numbers adding another layer of greatness to the livery, with the icing on the cake being the Marlboro stickers on the car making it look like a modern-day version of the famous red and white colour scheme that donned the McLarens and Penskes of the 90s.

Rosberg then took the maiden GP2 title by fifteen points over Heikki Kovalainen winning five times including victory on home soil at Hockenheim, whilst Premat took two wins which helped ART wrap up the constructors championship over Arden by sixty-one points.

ART would run the livery for 2006 before it was dropped due to increased restrictions on tobacco advertising, meaning that the number one livery ever used in GP2 disappeared forever.

_
_
That’s it! We would love to get your opinion on this count down, let us know what you think of the list and if you think there are any you want to see on here. 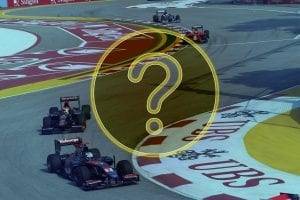