Yuki Tsunoda stormed to Pole position in Sochi on Saturday afternoon setting a blistering time of 1:48.688..

The Red Bull junior expressed his delight and said, “Until the last push I had a lot of conversations with my engineer, asking where I was losing to P1. Most of the time was in Sector 2. I also knew where I had to improve from Free Practice, and he [Jehan Daruvala] was really strong at Turn 8.”

“On the second set of new tyres I was trying to improve at that corner. I also made a lot of mistakes on the first set, so on the last push on the second set I put it all together. I improved a lot in Sector 2 and got P1 so I’m really happy with that.“

Speaking after Qualifying Daruvala said, “First of all, I’m happy to back here. I haven’t been here for a while, so that feels good. But all things said, honestly, I was a bit disappointed in the end because I led most of the way through. Also, the last lap in Sector 3, I pretty much almost nailed it. It’s six thousandths. I could have gone either way. Nonetheless, I’m happy for the team.”

“We’ve secured a one-two. I can’t wait. Like everyone says, it’s a long run down to Turn 2, so anything can happen off the line. Hopefully, we just all have a clean start.”

Speaking after qualifying Schumacher said, “Looking at Free Practice I think they [Carlin] were very strong to begin with. They showed very good pace from the beginning. On my side, I struggled a bit in FP, trying to find the limit and I did go over it a few times. But in general, I have a very good feeling – especially in that second stint.

I was also trying to see how long the tyres lasted. It was quite positive. As Jehan said, the tyre deg seems to be quite a bit different from last year, so it’s up to the drivers and the teams to try and understand what is happening as quickly as possible. I’m fairly confident that I have understood what I need and what it takes to be quick for tomorrow’s race. Yeah, fairly confident.” 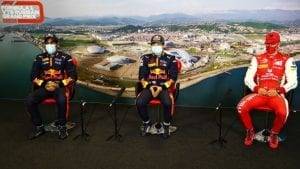