Nikita Mazepin drove a great race on Saturday, roaring through the field from 14th on the grid to win.

Mazepin expressed his delight with his second win of the year: “I am over the moon with the result. Starting P14, realistically you need to be very careful with setting your goals for the race. To win the Feature Race, the main race, with my teammate in second place, which makes it a double for Hitech, is a dream come true. We could not have even dreamed of this the night before.

“I had a very frustrating Friday and it makes it difficult to go to sleep when you are not satisfied with the job that you have done. I won the race from P14, and it was extremely fun inside the car but also tough at the same time. I’m sure that it was also great to watch. Thankfully it happened, and thank you for the support.”

Luca Ghiotto took a well-deserved podium to make it a Hitech 1-2. The Italian driver showed his experience, keeping it clean to take P2.. The Hitech driver has enjoyed his two home races, having taken second in the Feature Race at Monza last week.

The Formula 2 veteran took advantage of a good start and looked to have the pace to win. However, Mazepin passed him at the second Safety Car restart, and he had to settle for second.

Speaking after the race Luca Ghiotto said “In my second home race of the season here in two weeks, twice second after Monza in the Feature Race so not really happy to be honest. I hope to get that win for the few Italian fans that were watching here at the race today. I’m really frustrated honestly. It just doesn’t feel good when we did everything perfect and you don’t get that win.”

The podium was rounded off by Swiss Louis Deletraz. The Charouz Racing driver started the race in 12th and drove a strong race to sneak a podium.

Speaking after the race Louis Deletraz said “P3 today it was a bit of a crazy one to be honest. I’m normally not a fan of doing the opposite strategy which is hard, soft and today we had no choice we were pushed into it. Had a quite bad start down to nineteenth and we came back third so a lot of overtakes. Very good strategy from the team, good calls and I think good management from my side so very happy and fastest lap as well.” 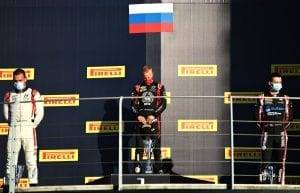