Tough Day for PREMA in Monaco

Tough Day for PREMA in Monaco

The PREMA Racing pair of Jehan Daruvala and Dennis Hauger experienced a difficult Friday in Monaco for Round 5 of the FIA Formula 2 championship.

Hauger ran in qualifying Group A, finishing fifth fastest in that session, while Daruvala could only post the fourth-fastest time in Group B, although he did have the potential to go quicker.

As a result, the Red Bull Junior Team duo will line up eighth and ninth, with Indian Daruvala ahead of his Norwegian team mate for Sunday’s Feature Race.

23-year-old Daruvala, currently third in the drivers’ championship with 41 points, described his session as “difficult”, adding: “We were out sync compared to everyone else, and that messed us up because I couldn’t really bring my tyres in.”

2021 Formula 3 champion Hauger said: “It has been a tough qualifying as I didn’t feel confident in free practice.

“Overall, not great, but even if the situation is not optimal, hopefully we will bounce back in the races.”

Hauger is right to be optimistic ahead of the Sprint Race, as the reversal of the top 10 for Saturday’s race puts the 19-year-old on the front row for the first F2 racing action of the weekend.

Hauger will be alongside Van Amersfoort Racing’s Jake Hughes, who brought Group B qualifying to a premature conclusion after a heavy crash at the Piscine section.

With both cars in the top three for the Sprint Race on Saturday on a circuit famed for its limited overtaking opportunities, Team Principal René Rosin will be quietly confident of a strong result for his team.

PREMA, the defending teams’ champions, are languishing in fifth place in the 2022 teams’ championship, and Daruvala needs a solid result to close on Felipe Drugovich, who tops the drivers’ standings.

In his rookie F2 year, Hauger has scored 14 points so far and will be looking to get some more points on the board this weekend. 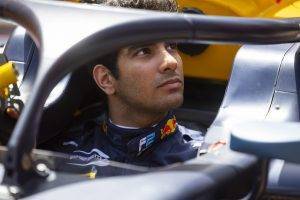