New Zealander Lawson, driving for Carlin, finished Sunday’s Feature Race ninth, having qualified a lowly 16th in Friday’s qualifying session, which he described as a “disaster.”

The 20-year-old produced a stirring fightback on Sunday though, to pick up two points.

Lawson made most of the close running on the opening lap, saying: “Today’s race (was) probably one of the best first laps I’ve ever had.”

Despite the meteoric start, Lawson felt his result could have been better, bemoaning getting stuck behind ART driver Theo Pourchaire.

The Kiwi said: “I was really fast but I got stuck behind Pourchaire the whole race and just could not do anything. That’s where I lost it, for sure. If we had been able to clear him in the pit stop, we were looking at a top 5.

“But we didn’t, I got held up and got done by the guys coming through on Options at the end.”

Lawson’s Feature Race result matched that of the Sprint on Saturday, where he also finished ninth.

However, the former Hitech driver was unrewarded for that drive, as the Sprint only awards points to those who finish in the top eight, albeit with reduced points available.

DAMS driver Ayumu Iwasa also found himself stuck behind another driver, with consequences that dramatically altered his Sunday.

The Japanese driver was following PREMA’s Jehan Daruvala when the Indian’s car suddenly slowed on the exit of turn 5, catching the 20-year-old Iwasa off-guard meaning he damaged his front wing and dropped out of the points scoring places.

Iwasa said: “It was not his fault and not my fault at all. It was just an unlucky situation; I was planning to overtake him on the next lap and so closed the gap. In T5 the gap between us was so close, too close to react.”

After the contact, the Honda Formula Dream Project driver said he had a “big balance difference between right and left corners,” which hampered his lap times.

The DAMS driver also suggested that he could have reached the top three without the contact.

Iwasa had finished on the podium in Saturday’s Sprint Race, crossing the line second behind Felipe Drugovich, who won both races in Spain this weekend.

Hitech Grand Prix’s Juri Vips Sunday looked like it could be fruitful after qualifying on the front row on Friday, narrowly beaten to pole by Virtuosi’s Jack Doohan.

The Estonian’s Sprint Race ended in the gravel at Turn 4 and he was hopeful of a good points haul in the Feature Race after throwing away potential points at the previous round in Imola.

However, things went wrong at the start as he lost out to ART’s Frederick Vesti on the run to Turn 1.

Vips’ Hitech team attempted to help the situation with an early stop for the hard tyres, but the 21-year-old had no pace after his slow stop, which saw him lose time to the frontrunners.

Vips said: “In Race 2 (the Feature Race), we had a major issue with the brakes and no pace.

“I just want to get to Monaco, get in the car there and have a clean weekend.”

Depsite finishing the Feature Race 17th, Vips’ weekend in Spain was not a total waste, given he got to drive the RB18 of Sergio Perez, saying: “It was a great F1 experience.”

With Daruvala marking this weekend as his first without a podium visit and PREMA team mate Dennis Hauger without any points, Monaco coming so soon will be a blessing for the Red Bull Junior Team. 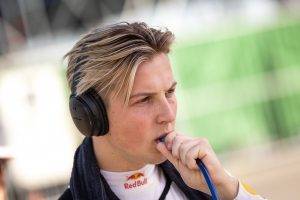