In the tracks brief history it has already created some memorable moments in F2 such as Antonio Giovinazzi’s stunning double victory for Prema in 2016, right under the nose of Formula 1.

That event in 2016 was littered with drama. The Feature Race alone saw four Safety Car interventions and a great fight for the win between Antonio Giovinazzi, Sergey Sirotkin and Raffaele Marciello.

Other memorable moments in Azerbaijan include Charles Leclerc’s great weekend in 2017 scoring a win in Race 1 and a well earned second place in Race 2.

The track itself is certainly unique for a street circuit with long straights and plenty of slow speed corners throughout the middle of the lap including the famous Turn 8.

Turn 8 is incredibly narrow at just 7.6 meters wide and has seen it’s fair share of incidents over the years both in F1 and F2.

The rest of the circuit is technically challenging with the heavy braking zones of Turns 1 and 3 which are also Bakus best overtaking opportunities.

Turns such as Turn 4, 5 and 6 are very different and are part of what makes Baku exciting and challenging. The Baku City Circuit does have shades of the Guia Street Circuit in Macau and a lot of the time it produces equally memorable racing.

It is always very enjoyable watching F2 cars tackle Baku and it is a welcome feature to the calendar. 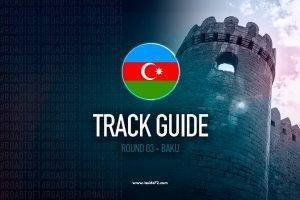