Though their decisions to start on slick tyres paid off, Trident’s Richard Verschoor and PREMA Racing’s Jehan Daruvala initially struggled during the wet-dry Red Bull Ring Feature Race in Round 8 of the 2022 FIA Formula 2 Championship.

Verschoor crossed the line first before being disqualified when he could not provide enough the required 0.8 kg fuel sample after the race.

That promoted Daruvala to first, but he was then demoted to 12th after he received a 20-second post-race penalty for having his grid box dried by PREMA Racing before the race start.

Verschoor started eighth and made up a place off the line. But as the field approached Turn 3, he struggled for traction and ran wide, dropping down to ninth. He explained to InsideF2 in the press conference after the  Feature Race that his choice of starting tyre made him cautious on the opening lap.

“For me, it was mainly being very careful to overtake the people on the wets because I had to go around the outside, on the inside.

“Then at the beginning, there was only one line, so I think that was the most tricky part.”

The track dried to the point that, after the Safety Car was withdrawn on Lap 4, Verschoor had a significant pace advantage over his rivals on wet tyres. He drove around his opposition on Laps 6 and 7 to take the lead, which he held comfortably until the end of the race.

That early safety car period occurred because of contact between Daruvala and Marcus Armstrong, yesterday’s Sprint Race winner, in Turn 3 on the opening lap. Armstrong, also on slicks, had run wide entering the sharp right-hander. As he attempted to rejoin the racing surface, Daruvala also ran wide and hit the Hitech Grand Prix driver, spinning him into retirement.

“Obviously, we were on the slicks, so it was really tricky to brake. I saw Marcus went really, really deep. I tried my best to stay on the track, and I think instead of going around, he just rejoined back where he left. And I was there, so I couldn’t really go anywhere.

“It was a pretty big impact, so I thought I damaged my front wing, but the team said it was fine. Hopefully it is a bit damaged judging by the pace I had on the primes!”

Daruvala followed Verschoor through into a net second as the track fell to the dry starters’ advantage after the safety car restart. On Lap 11, Campos Racing replacement driver Roberto Merhi took the position from Daruvala, who pitted the following lap.

The undercut helped Daruvala retake the position for his hard-tyre stint, but he gradually fell into the clutches of Merhi, who got by him once again at Turn 3 on Lap 39.

But Merhi earned a five-second post-race penalty for exceeding track limits, initially promoting Daruvala to second place. With the Indian driver’s own penalty, victory went to Logan Sargeant, who crossed the line fourth.

Daruvala lies fourth in the standings on 80 points, 74 behind championship leader Felipe Drugovich and just five ahead of Charouz’s Enzo Fittipaldi. 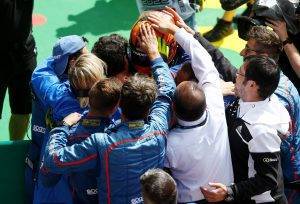