Trident – 11th in the driver’s championship

The underdogs of Formula 2 came into the 2020 season with the hope of not just winning but merely surviving would be as good as winning the championship.

With Trident finishing bottom of the teams championship for two years in a row and a pandemic which slashed had Formula 2’s teams revenues to pieces, it would make 2020 yet another transitional year.

To make matters even harder, Trident would change it’s line up once again with returnee Roy Nissany and Marino Sato coming into the 2020 season as unknown quantities with the Israeli returning from the wilderness whilst Sato had a handful of outings with Campos replacing Dorian Boccolacci.

Both showed flashes of brilliance in the 2020 season with Nissany potentially taking Trident’s first win in four years in the Sprint race at Spa before the Israeli collided with Dan Ticktum putting him out of the race.

2020 was Trident’s worst season since 2009 with the Italian outfit only picking up six points all season and once again finishing at the foot of the teams championship.

Nissany got a perfect start with a point in the first Austria Feature race ahead of Mick Schumacher after the Israeli defended with all of his might just to hang on for the final point at the flag.

However, the second Austria meeting only generated two fastest laps which only counted for pride as Nissany was nowhere near the point-scoring positions finishing fifteenth and eighteenth.

There was further misery in Hungary when Nissany and Trident teammate Sato collided in turn one on the second lap of the Feature race putting both drivers out and ruining their weekends.

The first Silverstone meeting saw Nissany’s most bizarre performance to date in qualifying when he tripped over Schumacher not once but twice in qualifying with the Israeli giving the German a love tap for good measure before holding Giuliano Alesi and spinning out at Copse.

In the Feature race, Nissany was out on lap four with a mechanical failure to continue his miserable run of form before finishing sixteenth in the Sprint race.

The second Silverstone meeting saw Nissany struggle again with no points, whilst in Spain Nissany crashed in the Feature race with just five laps to go and with it another pointless weekend.

Spa saw Nissany back in the points with eighth in the Feature race putting him on reverse grid pole position for the Sprint race where he led the first three laps before a collision with Ticktum at Les Combes putting him out of the race.

Nissany continued his good form in Monza with fifth on the grid for the Feature and ran in third up until his pitstop but a collision with Nikita Mazepin at the Rettifilo saw him earn the attention of the stewards with a ten-second penalty for his troubles.

Mugello saw Nissany miss out on the points again with tenth in the Sprint before eliminated in a lap one shunt at Sochi ruining his weekend.

The Israeli then potentially played a crucial part in the championship race after Schumacher collided into the Israeli in qualifying ruining both driver’s cars and putting both’s weekend on the back foot.

Marino Sato’s arrival at Trident was an early baptism of fire in Austria with two spins in practice and qualifying putting him last on the grid with his race only lasting two laps courtesy of a mechanical failure.

The second Austria was better for Sato with eleventh in qualifying and sixteenth in the race however he was out early again this time in the Sprint after a single lap.

Hungary saw him and teammate Nissany docked a place on the grid for a tyre usage infarction before Nissany added insult to injury by locking his brakes and slamming into Sato at turn one putting both out.

Both Silverstone and Catalunya race weekends saw Sato come away with nothing and in Spa Sato suffered another collision this time at the hands of Jehan Daruvala on lap thirteen.

Sato finally made his breakthrough in Mugello with a single point in the Sprint after a stellar drive from fourteenth on the grid but that was good as it got for the unlucky Japanese driver as he failed to trouble the point-scoring positions for the rest of the season.

In a season full of turmoil it was perhaps a miracle that Trident made it at all to Formula 2 this year. However, it was hardly a vintage season and six points is hardly a fitting reward for a hard season of work.

Trident will have to hope that the slump can be eroded for 2021 and find good results that the hard-working mechanics richly deserve.

Nissany and Sato proved to be too crash-prone in their first and seemingly only season together although Nissany’s performances in the first Austria meeting and qualifying in Monza the only highlights of a truly tremulous season. 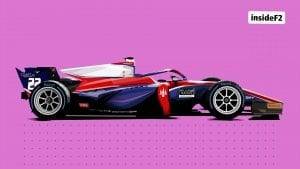