After a two-month break, Formula 2 and Trident will be back in action in Bahrain, which hosted the preseason test at the beginning of March.

Roy Nissany and Marino Sato will be focused and highly determined ahead of the final two rounds of the season.

The circuit, which has hosted 15 Bahrain Grand Prix’s since 2004, was originally supposed to host the F2 season opener but after preseason testing, the spread of COVID-19 forced the event to be rescheduled. It will now host the final two rounds.

There are different configurations at the BIC International Circuit so the final two rounds will have different layouts to determine which of the six drivers that still have a chance of the title will take the championship.

The three days of preseason test gave the drivers a chance to gain experience on the classic Bahrain circuit, which will be used this weekend.

Back in March, Nissany covered 152 laps while Sato managed 20 fewer, the distance of nearly four Feature Races. With corners that are hard on the tyres, experience will come into play around the circuit.

Because the desert track isn’t used very often during the season, sand can get on the circuit, and that along with the thermal degradation are just some of the challenges that the drivers will have to face this weekend.

The main goal of Sato and Nissany this weekend is to consistently run in the points and be ready to pounce should an opportunity arise.

“The performance of the team and its drivers improved significantly in the second half of the season. The runs of Roy Nissany and Marino Sato have been increasingly convincing especially since Spa-Francorchamps. With a little more experience and luck, they would have achieved even higher goals. In Bahrain, we want to confirm our growing trend and improve our position in the championship, which currently does not reflect our value.”

The first round at Bahrain will go ahead this weekend with the first track action on Friday with the only practice session of the weekend, with Trident hoping that they can get themselves some good points in both races.

Let us know your thoughts @F2inside on Twitter and join our ever growing community of Formula 2 fans!Image 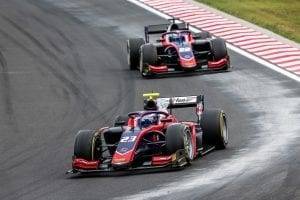