What should have been a fun home race weekend in FIA Formula 2 for Trident turned into a complete nightmare as neither car could make it into the points in either the Sprint or Feature Race, leaving the Italian team with a point-less weekend.

Right from the get-go, the team struggled to find the right setup that suited both drivers on this track. After the free practice session, Trident made some technical changes, but they did not pay dividends.

Saturday’s Sprint Race showed some recovery as the pair managed to make some places. Verschoor clawed his way to 13th from P17 start, and Williams followed suit to slot in behind the Dutch driver in P14.

Sunday’s Feature Race did not go much better as the pair started on the Prime set of tyres, which meant that there was very little Trident could do to gain positions thanks to the early safety cars.

Trident’s Team Manager Giacomo Ricci was unhappy with how the weekend had panned out and believed that starting on the Prime compound tyres was the wrong decision.

“Today’s race gave us very little satisfaction. The results were conditioned by the negative qualifying session, which forced Verschoor and Williams to start from row 10 on the starting grid.

“Furthermore, the strategy of starting with both drivers on Prime compound tyres did not reward us, as a Safety-Car situation in the early stages favoured the drivers who had started with the softer compound.”

Although both drivers had solid pace, multiple trains of cars using DRS formed up, meaning there was very little that both Verschoor and Williams could do in terms of overtaking. As a result, as the chequered flag fell, Verschoor finished 15th while Williams finished 16th.

As Ricci further added: “Even in today’s race, there were few overtakes on track, and only those who guessed the correct strategy managed to recover.”

The Trident team will now look forward to recover lost ground in Barcelona in one month’s time. 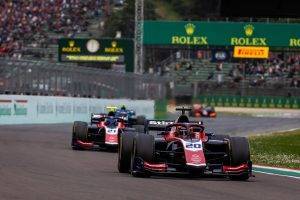