After claiming his first win of the season in the Sprint Race in Bahrain, Verschoor was back on the pace with another podium as FIA Formula 2 took to the streets of Jeddah.

Verschoor took second place in the Feature Race to take him to the dizzy heights of third place in the Drivers’ Championship as Formula 2 leaves the Middle East.

The 21-year-old finished fifth in the Sprint Race, but his Feature Race proved more fruitful when he started second and stayed in the hunt for victory for the entire race.

Verschoor kept up the pace and repeatedly tried to take the lead before attempting the overcut strategy to try and get past Felipe Drugovich ahead.

Returning to the track still in second, Verschoor kept the same position for the rest of the race, saving his tyres to try for an attack at the end of the race.

The Australian showed some good pace in clean air but couldn’t keep up with the others when trying to overtake, something the team and him hope to work on before the next race.

Giacomo Ricci, team manager, said: “We are delighted with the second place scored by Verschoor in the Feature Race.

“We were able to claim the same result we had achieved in qualifying, and it came at the end of a race that saw us among the main protagonists from beginning to end.

“In addition, we finished in close contact with the winner. Verschoor delivered a high-level performance, he was perfect at the start and did not make any mistakes.

“Our car was highly competitive and supported him until the end. Today’s performance was remarkable from all points of view: the technical staff and the pit-stop guys have been perfect as well.

“As for Williams, despite the good position on the grid and the promising start, he lost some concentration and struggled in the mid-pack battles.

“Now we will give our 100 percent to help him as much as possible to manage that kind of situation, because when he is alone, his pace is excellent, and we need his contribution in terms of the driver and team championship.”

Trident will now prepare for the first race in Europe, with Round 3 taking place in Imola from the 22nd to the 24th of April, where both drivers will hope they can keep up the impressive pace they have demonstrated so far. 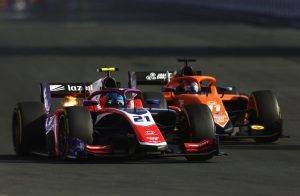