Neither of Trident’s drivers, Richard Verschoor and Calan Williams, could score any points on a disappointing Saturday during the FIA Formula 2 Sprint Race around the streets of Monaco.

It was always going to be a difficult task for both drivers since they both started at the back of the grid, with Williams starting in P13, and Verschoor starting last after Friday’s qualifying where he experienced electrical difficulties.

Despite both drivers performing well, this track is known for being near-impossible for overtakes, limiting their expectations for their final results in this weekend’s races.

Nonetheless, Richard Verschoor made his way up to 13th place, while team mate Calan Williams finished one place behind him in 14th after each Trident driver took advantage of different opportunities during the race, including a couple of retirements from both of MP Motorsport’s drivers.

However, Giacomo Ricci, Trident Team Principal, wasn’t happy about missing out on points in Saturday’s race:

“We are clearly not satisfied with the outcome of today’s race: due to the backward position on the starting grid, our drivers finished the Sprint Race outside the points zone.

“Williams was making his debut on the streets of Monte Carlo and finished in 14th place, right behind Verschoor.

“The driver from the Netherlands had more experience with the venue but was forced to start from the back of the grid due to an electrical problem that occurred during qualifying.

“For tomorrow’s feature race, we will try to recover using the strategy variable offered by the mandatory tire change.”

If the team pulls off a good strategy, they could be in for points that will give their drivers a boost in the standings; Verschcoor is currently in ninth place, while Williams is in 18th place.

The Monaco race weekend will conclude after Sunday’s Feature Race, scheduled for a 9:50AM start, local time. 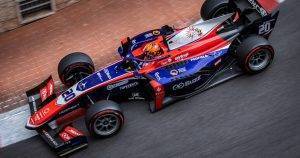