The Feature Race at Silverstone saw the two Trident Motorsport drivers race with different strategies as the Round 4 of the Formula 2 Championship came to an end.

Bent Viscaal and Marino Sato showed impressive performances but couldn’t fight and got points due to their starting positions.

Viscaal started from 17th with Option tyres. Unfortunately, wheelspin saw the Dutchman lose spots, but he put in a good recovery in the first part of the race.

The team chose to extend the first stint and allow him to be more competitive on the Prime tyres at the end.

After the pit stop, Viscaal made a quick overtake but got stuck in 13th, and that’s where he finished the race.

Sato started 21st on the grid due to an engine problem that slowed him down in qualifying.

Trident chose the opposite strategy for the Japanese driver, starting on the Prime tyres and then moving onto the Option tyre later during the race.

Sato made a good start, but his grid position stopped him from going beyond 19th. However, the driver delivered some impressive lap times in the process.

Giacomo Ricci, Trident Team Manager, said: “Sato made a good start with the Prime tyres, while Viscaal lost time due to wheelspin.

“The Dutchman promptly regained some spots in the early stages. The strategy of extending the first stint was chosen on his car, albeit with the Option tyres, in order to allow him to be competitive in the final stages.

“Unfortunately, coming back from the pit lane, he overtook Boschung but got stuck behind Beckmann and ended up in P13.

“Sato set at a good pace and good lap times, but his grid position prevented him from fighting for a better result.”

The FIA Formula 2 Championship has now reached its halfway point, and the Trident team will now take a break for just over a month when they return to Monza in September.

At its home track, Trident Motorsport will count on some additional motivation to deliver a positive run. 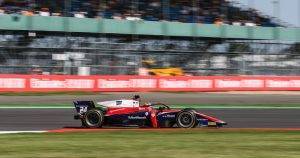