Despite stalling during his Feature Race pit stop, Richard Verschoor fought his way to a fifth-place finish, while his Trident Motorsport team mate Calan Williams ended up at the back of the pack after a costly mistake from the race lead.

Nonetheless, Trident returned to the points with Verschoor’s P5 after a brilliant drive through the field. If there wasn’t a delay in the Dutchman’s pit stop, Trident and Verschoor might have fought for a podium place.

Verschoor made a great start from the third row and held his position until his pit stop when he switched from the option tyres to the primes.

However, he was left at the back of the pack when his car stalled, requiring Verschoor to fight his way back through the field to fifth in a demonstration of the pace that he and the team were capable of.

Meanwhile, Williams opted for the opposite tyre strategy to his team mate, but it did not pay off amid all the yellow flags, disruptions, safety car, and virtual safety car appearances.

Before his pit stop, the Australian was holding onto P1, but he locked up under braking and ended up in the runoff area, compromising the rest of his race.

After a change of tyres, Williams finished the race at the back of the finishers in 16th place.

Giacomo Ricci, Trident Team Manager, said: “We are delighted to be back in the points zone with the fifth place achieved by Richard Verschoor in a comeback today run.

“Today’s result is very helpful to his and the team’s standings, where there were no points logged since the Jeddah race.

“Unfortunately, had he not stalled in the pit lane, we would have secured an even better result. Our cars were very competitive in terms of race pace.

“Calan Williams, who was pushed off the track by another driver in the Sprint Race, did not pick up any points due to overshooting a corner and a strategy call that didn’t pay off.

“But Baku is an unpredictable race where it is difficult to make predictions, and it did not disappoint even this year. Now we will work to start the upcoming European stint that will begin in early July at Silverstone.”

The next race for Trident will be the first weekend in July when the FIA Formula 2 Championship heads back to Silverstone for the season’s midpoint. 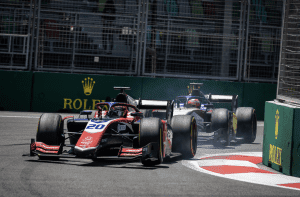