Trident scored their first points in the 2021 FIA Formula 2 Championship in Bahrain, with seventh in the second Sprint Race.

Marino Sato put in a good fight to get from 15th to seventh, his best finish in the series so far.

Rookie Bent Viscaal made a promising debut for the Italian team, just missing out on the top 10 in both races.

Qualifying didn’t go the way Trident would have wanted, with both drivers unable to show their full potential.

The start of the first Sprint Race saw both drivers suffer from a temperature issue, which ultimately cost them points.

Viscaal had a top ten finish taken away from him on the last lap after fighting back from 17th. A 5 second time penalty for overtaking under yellow flags pushed him down to 13th, just ahead of teammate Sato.

Lower temperatures in the second Sprint Race saw the race decided by the teams’ and drivers’ strategies. The outcome eventually went the way of those who gambled on the tyre change during the late safety car.

Sato, who pitted for a tyre change, was then able to recover to seventh for his best F2 result.

Viscaal was unfortunate in his strategy as it didn’t go his way, but still managed to finish 12th and just outside the points once again.

Trident Team Manager, Giacomo Ricci, said: “We are quite satisfied with the seventh-place that Marino Sato scored in Sprint Race 2, which is also the best result in the category for him and allows Trident Motorsport to claim the first points of the season.

“The gamble of changing tyres paid off for him. On the other hand, we made the mistake of not calling Bent Viscaal back into the pit lane, too, while the race was in safety-car condition.

“As for Sprint Race 1, our drivers started in arrears because they didn’t get results in line with their potential in qualifying, and they also experienced temperature issues at the start.

“Viscaal was a protagonist of a decent race earning a 13th place position. Also, in Sprint Race 1, Sato improved from P22 to 15th place at the end.

“Now we aim to leave Bahrain with a convincing performance in tomorrow’s Feature Race.”

Trident will want to keep up the promising start they made in today’s Feature Race, with Viscaal starting in 15th and Sato in 18th.

Will the Tridents be able to score more points in the Feature Race? 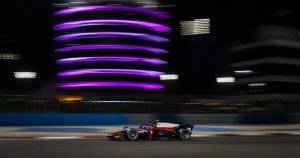