Trident left Monaco without adding any points to their total, following a tough weekend for the team, despite showing solid pace.

The second Sprint Race saw both Bent Viscaal and Marino Sato show good race pace, but were involved in incidents on the wet Monte Carlo streets.

However, both drivers pulled off a great comeback in the Feature Race, with Viscaal finishing just outside of the points in 11th, while Sato finished 14th.

A wet Sprint Race 2 led to several incidents across the track, and the Trident pair were not exempt.

Viscaal, who finished 12th, made contact with Charouz’s David Beckmann, leading to a ten-second penalty in the race classification. Meanwhile, Sato suffered damage from contact early in the race, which affected his race pace.

The Feature Race wrapped up the Monaco round of the FIA Formula 2 Championship, with both Trident drivers having a solid performance. Unfortunately, neither car made it into the points, due to their low starting positions, on a circuit where overtaking is difficult.

Viscaal started 15th and made no mistakes, finishing just outside the points in 11th. The result did nothing to showcase the performance of the Dutch racer, who had shown solid pace throughout all three races.

Sato also had a positive Feature Race, on the opposite strategy to his team mate. The Japanese driver managed to gain four places from where he started to finish 14th. Sato also made an additional tyre change to try and get the fastest lap, which he just missed.

Giacomo Ricci, Trident Team Manager, said: “Sprint Race 2 was the first wet race of the season. Our drivers had no experience, but their race pace wasn’t bad at all. Both had a good start, but their position on the grid penalized them on a track where it is extremely tough to overtake. Sato damaged his car in the very early stages, while Viscaal put up a convincing pace.

“Our drivers had opposite strategies in the Feature Race. Viscaal started with the Prime tyres, while Sato chose the Option compound. In the end, the two choices turned out to be equivalent and in line with our projections.

“The Dutchman made a good comeback, and Sato was very convincing. We made a second tyre change with the Japanese racer to look for the fastest lap in the race, which we just missed. Sato’s pace in the final run was remarkable. Now we aim to return to the points in Baku!”

Trident will head to Baku for the next round of Formula 2, with the two drivers making their debut at that track. 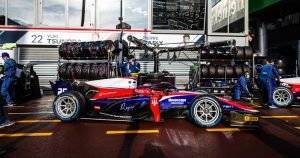