Trident with Sunday Struggles in Monaco

Trident with Sunday Struggles in Monaco

After a challenging FIA Formula 2 Championship weekend in Monte Carlo, Trident Motorsport drivers Calan Williams and Richard Verschoor could not get close enough to score points during the Feature Race on Sunday.

Unfortunately, Williams, who was close to scoring points throughout the race, dropped a few positions before retiring on the final lap. As for Verschoor, his strong performance during the race could not make up for his backward starting position on the grid.

Giacomo Ricci, Team Manager for Trident, believed that he knew what went wrong this weekend. He mentioned the following:

“We leave Monte Carlo with zero points due to a negative qualifying session that compromised our weekend.”

But, despite the team not being able to turn the disappointing start to the weekend around, he did think that the Trident drivers had some positives to their performance.

“However, I think we can take some positive points from today’s race.”

Despite not being able to push the car to the top ten, Verschoor did prove to be competitive with a promising race pace. Ricci explained:

“Verschoor set the fastest lap and showed a very solid race pace, a sign that he has a very competitive racecar.”

On the other hand, Ricci believed that Williams showed what Trident is capable of as the team performed an impressive pit stop strategy.

“As for Williams, he had managed to climb back up to the points zone with a good start, an excellent pit stop and the strategy of starting with Prime tires.”

However, Ricci continued to be critical, convinced that the neutralizations ruined Verschoor’s Feature Race.

“The double neutralization penalized his race strategy, as he was starting with Option tires.”

As for Williams, Ricci concluded that, ultimately, the final stages lasted too long for the Australian, despite the solid pit stop efforts from the Trident team.

“Calan was defending eighth place well until he left the door open at the chicane and was overtaken by two other drivers. On the final lap, he was punted from behind and sent off-track.”

The next round of the FIA Formula 2 Championship season will take place in Baku, Azerbaijan, from June 10th to 12th. Hopefully, the Trident drivers will score some well-deserved points there. 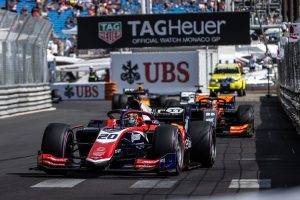