The pressure is on for the Milan based Trident team to take a second bite of the Italian cherry during Round 9.

Picking up a solo point at the season opener in Austria and four Feature Race points at Spa-Francorchamps Trident currently sits at the bottom of the Teams’ Championship.

Just seven days ago the team was racing at the fast Monza circuit. This weekend sees them try their hand at the scenic Tuscan track.

The circuit has been host to the MotoGP races for many years, therefore it is a racing fan favourite. But how will the Formula 2 cars fair around this complex circuit?

There are plenty of ups and downs and 14 turns to negotiate, plus a fast straight to overtake.

For the first time during this COVID-19 affected season fans will return!

The circuit has allowed for a maximum of 2,880 people to attend. How they will be accommodated around the circuit is yet to be seen.

With four retirements, and his highest position of the season being P12 during the Silverstone-1 Sprint Race, Marino Sato is yet to score any points. He hopes to improve his efforts this weekend to get himself on the scoreboard.

Roy Nissany has also retired his car four times but has managed to score points at the first Austrian Feature Race after a P10, followed by a P8 in the Belgian Feature Race. He sits in 17th place in the Drivers’ Championship.

Nissany qualified in fifth place last weekend at Monza and is hoping to deliver again this weekend. Although he will be looking to avoid any further time penalties like he picked up during Monza’s Sprint Race.

The talented Israeli driver has been added to the Williams Academy register and has had two Formula 1 experiences during the Spanish and Italian Grande Prix.

“Roy Nissany showed very high levels of performance in the last couple of rounds at Spa and Monza, but due to specific situations, he was unable to collect actual results, which we expect to happen at Mugello. At the challenging Tuscan track, we also expect Marino Sato to confirm the clear progress he made throughout the season.”

The team’s goal this weekend is to score some solid points under the Tuscan sun.

After Mugello there are just three race weekends left to fight for a higher placing in both Teams’ and Drivers’ Championships.

Sochi is up next, before the Formula 2 season concludes with a double-header at Bahrain’s, Al Sakhir circuit. 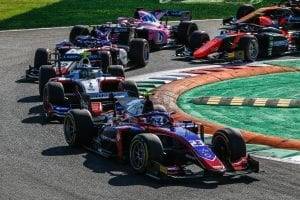