Red Bull Junior driver Jonny Edgar has to put his FIA Formula 3 career on hold  after completing one round of the 2022 season with Trident. Team Manager Giacomo Ricci welcomes Oliver Rasmussen to their line-up as Edgar’s replacement.

Edgar was striving for success in his second F3 season with Trident as he was Carlin‘s highest point scorer in 2021, completing his rookie season in 18th with five top 10 race finishes.

The Briton has only qualified once below the top 15 ever since his debut with Trident, including the pre-season test and the season opener in Bahrain.

Unfortunately, the 18-year-old was diagnosed with Crohn’s Disease, a lifelong condition of chronic inflammatory bowel disease that affects the digestive tract lining.

Edgar has since selected to step back from racing to prioritise his health until he’s able to compete at the required level. Team Manager Giacomo Ricci commented on this decision:

“Since the start of the season, he was weakened by physical issues, but he fought like a lion. He did not back down and continued to race.”

“However, his condition necessitates a break from his competitive activity to support his recovery. Jonny always gave his maximum to the team. He has a fantastic family and is a wonderful guy.”

While everyone at Trident wishes him all of the best in his recovery, the team is delighted to welcome Oliver Rasmussen aboard for his second campaign after having his first taste of the F3 machinery last year with HWA Racelab.

The Dane has good experience under his belt, during the 2020 Formula Regional European Championship he came away with 6 wins, 13 podiums, and 5 pole positions, earning him the title of Vice-Champion.

Ricci believed that Rasmussen could undergo a similar improvement to Jack Doohan, who scored four wins and three podiums as it allowed the team to secure their maiden title.

He stated, “Oliver Rasmussen will be replacing Edgar. He is a quick and experienced driver, and we are proud to welcome him to the Trident Motorsport family.”

“I am sure that he will quickly gain the chemistry needed to gel with the team, making the most of the four days of testing between Jerez and Barcelona, which will be followed by the round at Imola.”

“We will put up our best effort to help Oliver, and we are sure that he will provide a great contribution to the team.”

Rasmussen will now look forward to his debut with Trident during the two days of post-season testing in Jerez. 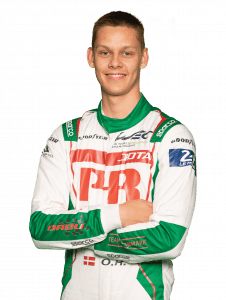