The final Formula 2 Feature race of the 2021 season was just around the corner as Trident Motorsport and its drivers Bent Viscaal and Marino Sato reflected on their performance during the Sprint Races on Saturday.

Unfortunately, the opening race day at Yas Marina Circuit did not go well for the Trident pair. Despite all the efforts, neither Viscaal nor Sato could get close enough to the points-paying positions.

When asked what went wrong during Sprint Race 1, Team Manager Giacomo Ricci explained, “The outcome of qualifying impacted the results of the opening race of the weekend. Our drivers made good starts but didn’t manage to score points.”

“Sato lost a few spots early in the running, while Viscaal showed a solid race pace. He was one of the five fastest drivers on track.”

Sadly, the results didn’t improve for Sprint Race 2. The Trident team seemed to experience progress throughout the day yet points remained out of reach for both drivers, just as in Sprint Race 1. Viscaal did manage to get close, but it was not enough.

Reflecting on Viscaal’s on-track performance, Ricci said, “We managed to achieve a top-10 finish with Viscaal, who won several on-track battles and once again showed a positive race pace.”

But the Dutchman had to make his way back after some tough first laps, which cost him the possibility of scoring points for the team.

“Unfortunately, he lost valuable ground during the initial stages. Otherwise, he would have finished in the points.”

As for Sato, the Japanese driver left Abu Dhabi with a sixteenth position as his high point from the weekend. Ricci said the following about Sato’s race:

“Marino Sato could not get beyond P16 at the end of an uneventful run”.

Although Trident would not end this season on a high, there is plenty of time left to prepare for 2022 where they will hope for an improvement on their P9 in the teams’ championship. 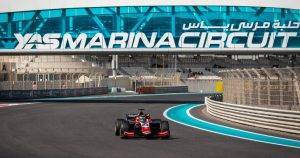