He will be joined on the front row by 2021 Haas driver, Nikita Mazepin, with his Carlin team mate Jehan Daruvala in third.

The final qualifying session was chaotic from the start, with 13 cars diving out of the pits as soon as the lights went green.

Christian Lundgaard pipped Tsunoda by 0.047 seconds to top the timing sheets with Championship contenders Mazepin and Callum Ilott in third and fourth.

Mazepin then swooped in with the fastest lap up until that point – a 1:02.798, ahead of Daruvala and Lundgaard.

However, this qualifying session seemed to go from bad to worse for Championship leader Mick Schumacher.

Both PREMAs waited in the pits until the rest of the grid were already out, trying to establish a gap to the cars around them.

However, with 21 minutes remaining Schumacher finally joined the track and ended up leading a train of cars whilst being forced to battle for track position.

The newly announced Haas driver for 2021 was then forced to bail on his second flying lap after being caught out by Artem Markelov leaving the pits.

Both HWAs tried to take advantage of the empty track as the rest of the grid boxed for new tyres.

Markelov jumped up to sixth, but Theo Pourchaire’s lap was ruined after he was caught out by cars on the pit exit.

The session was red flagged with four minutes remaining after Luca Ghiotto left the track heading into Turn 3.

In typical Formula 2 fashion, the final minutes could prove to be crucial in the title battle.

Tsunoda locked up into Turn 4 and was forced to bail out of his lap, whilst Schumacher had to weave his way through cars on his flying lap.

As a result, he had a near miss with Marcus Armstrong, before disaster struck for the German driver.

Heading into the final corner, he tried to go around the outside of Roy Nissany. However, the Trident ended up clipping the back of Schumacher’s car and going off.

The session was red flagged as a result and Schumacher is currently under investigation for the incident.

Tomorrow’s Feature Race will see Shwartzman lining up fourth, ahead of Drugovich, Lundgaard and Markelov.

Dan Ticktum will start in eighth, whilst Callum Ilott will have being hoping for a better qualifying position after ending up in ninth alongside Louis Delétraz in 10th.

Guanyu Zhou qualified in 11th with Sato and Piquet lining up behind him.

Ghiotto will start in 14th after his incident earlier in the session, just in front of Armstrong and Giuliano Alesi in 15th and 16th respectively.

Pourchaire managed to qualify in 17th on his second Formula 2 weekend, with Schumacher starting behind him in 18th.

Nissany will start on the 10th row of the grid alongside Ralph Boschung, on his return to the series replacing Jack Aitken at Campos.

Guilherme Samaia and Sean Gelael round out the timing sheet.

Qualifying has seen Shwartzman drop out of title contention and with Schumacher starting towards the back of the grid, could the Championship pendulum swing towards Tsunoda, Mazepin or Ilott?

Will the title battle go down to the final Sprint Race? 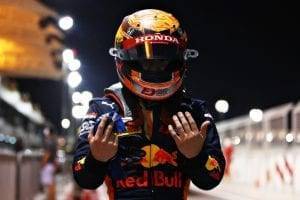