Yuki Tsunoda continued his domination of the second meeting in Austria after taking pole position ahead of the Virtuosi pair, Guanyu Zhou and Callum IIott.

The Japanese driver, who had a difficult opening first round of the season, looked uncatchable for most of the qualifying session despite Zhou coming close to nabbing pole position from the Red Bull junior.

With the weather set to be a washout for tomorrow’s Feature Race, securing a clean lap and a good track position would be vital for the likes of Mick Schumacher and Luca Ghiotto in order to boost their championship hopes.

PREMA’s Schumacher and Robert Shwartzman didn’t follow the rest of the field as the green light Illuminated for the session to start. Instead they waited for the track to clear.

The first driver to set the pace was Carlin’s Tsunoda who went fastest, with a time of 1.15.132.

Guanyu Zhou smashed that time with a 1.14.933 – putting him fastest, ahead of Tsunoda and Jack Aitken.

Tsunoda responded beating Zhou’s time by just over a tenth of a second to put himself back on provisional pole ahead of Callum IIott and Zhou.

Schumacher and Shwartzman eventually completed their first laps, with the rest of the field in the pit lane. Shwartzman finished fifth-fastest whilst Schumacher found himself down in 12th place.

With 10 minutes left to go all 22 cars, bar the PREMA’s, headed back out on track for their final qualifying runs with a provisional top six consisting of Tsunoda, IIott, Zhou, Ghiotto, Shwartzman and Daruvala.

However the likes of Luca Ghiotto and Jack Aitken struggled to improve on their first run, whilst Tsunoda had a lap time removed for a track limit infringement at Turn 9. As luck would have it the lap was slower than his pole time.

Zhou went fastest of all in the first sector but had to back out of his lap after being held up by Schumacher into Turn 2.

Aitken was first to improve as he moved himself up to fifth overall whilst Schumacher moved into ninth place at the expense of Marino Sato.

Zhou jumped his teammate for second place and was just 0.038 seconds short of Pole Position.

With no one able to produce one final run it was Tsunoda who secured his maiden pole in Formula 2 ahead of Zhou and IIott with Ghiotto, Aitken and Shwartzman rounding out the top six. After the session he said,

We’re in quite a good position. We have to do our job to get another podium or even better, a win.

Further back Daruvala secured seventh position alongside Christian Lundgaard who starts in eighth.

Schumacher and last weekend’s Sprint Race winner Felipe Drugovich lock out the fifth row. Schumacher was hopeful after the session.

21 out of the 22 drivers were within one second – this shows how close the field was again today.

P9 is is a decent starting position. We’re expecting a wet race tomorrow, so the grid position might not be as crucial as usual.

Sato who had a torrid weekend last time out will start 11th alongside Marcus Armstrong whose Free Practice was compromised by a spin.

DAMS’ Dan Ticktum had a quiet qualifying session where he could only manage 15th alongside teammate Sean Gelael, ahead of both Pedro Piquet and Louis Deletraz.

HWA had a challenging day with Artem Markelov 20th and Giuliano Alesi 21st. The Frenchman starts alongside Campos driver Guilherme Samaia who was just over a half-second behind Alesi in 22nd. 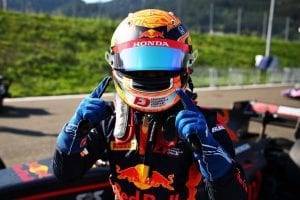