Yuki Tsunoda continued his good form from Spa Francorchamps after going fastest in Practice at Monza.

Practice would begin in warm glorious sunshine as ambient temperatures would be between twenty-seven and twenty-eight degrees with track temperatures hitting thirty-nine degrees which would put the Pirelli rubber under a tremendous amount of pressure for the next fourty-five minutes.

Roy Nissany got back up to speed after spending ninety minutes in a Williams Formula 1 car with the Israeli trying once again to get used to the heavier Formula 2 cars as the Trident driver set the early pace with a time of 1.33.297 despite a hair raising moment with Felipe Drugovich on the run down to the Parabolica which forced the Israeli onto the grass.

Behind Nissany was PREMA’s Mick Schumacher who set a time of 1.33.643 to go second quickest just over three tenths down.

Luca Ghiotto who was wearing a special helmet for this weekend went fastest shortly afterwards with a time of 1.32.837 ahead of DAMS’s Dan Ticktum before Schumacher massively improved his time to go top of the timesheets with a lap of 1.32.637, eight-tenths of a second ahead of Tsunoda and Ghiotto.

Tsunoda would go one better shortly afterward despite an initial poor first sector with twenty-eight minutes left of the session with a time of 1.32.169 with Nikita Mazepin flying up to second fastest just sixty-three tenths behind the the Red Bull junior.

Guilherme Samaia, Jüri Vips and Louis Deletraz had a brief visit to the Variante Roggia gravel trap with all three drivers kicking up stones on the exit of the corner.

Other big hitters who were struggling for pace in the first half of the free practice session included Christian Lundgaard who could only manage fourteenth fastest eight tenths down, Guanyu Zhou was a puzzling nineteenth over a second down, with two time race winner Felipe Drugovich only twentieth over a second down.

Samaia’s tough start came to a smokey end with an engine failure bringing out the virtual safety car to retrieve the parked Campos on the exit of the Rettifilo chicane,  much to the disgust of the unhappy Brazilian.

After Samaia’s car was pushed back behind the Armco barriers the session commenced under green flag conditions with Nobuharu Matsushita going very wide on the exit of the Parabolica after catching Mazepin late on a fast lap.

Lundgaard improved to second fastest with a time of 1.32.227, however, the Dane couldn’t get near Tsunoda who led the timesheets with nine minutes left to go in the session.

None of the top ten could improve their times as the checkered flag fell giving Tsunoda the early advantage at the end of the timesheets ahead of Lundgaard and Mazepin with Ticktum, Marcus Armstrong and Ilott rounding off the top six.

Schumacher was seventh ahead of Pedro Piquet and Ghiotto with Jack Aitken tenth ahead of Giuliano Alesi and championship leader Shwartzman.

Louis Deletraz could only manage thirteenth ahead of Matsushita, Vips and Jehan Daruvala who was struggling down in sixteenth place.

Artem Markelov was seventeenth fastest in front of Williams junior Nissany, Zhou, Drugovich and Marino Sato with Samaia bottom of the timesheets after his session came to an abrupt end. 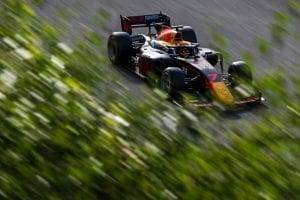