Tsunoda hots up the pace in practice

Tsunoda hots up the pace in practice

With extremely warm temperatures that peaked at 32 degrees the order of the day for Friday afternoon, the first Formula 2 Practice session, would be testing for the drivers to handle the Pirelli rubber that winced in the heat.

The first few minutes of Free Practice saw the drivers warm up their tyres with some using the hard rubber to start before switching to the mediums.

First to hit trouble was Frenchman Giuliano Alesi whose HWA Racelab machine became stranded – he spun and stalled off the exit to Abbey. Thus launching the virtual safety car.

Mick Schumacher and Robert Shwartzman were leading the time-sheets ahead of Daruvala, as Alesi’s car was pushed away.

Shortly after Alesi’s car was removed and the virtual safety car period ended the field cracked on with bringing the times down.

Tsunoda went fastest ahead of Christian Lundgaard and Sean Gelael – getting himself into the 1.40s.

Schumacher had a scare on a quick lap with the German losing the rear into the entry of Club Corner. Nevertheless, the PREMA driver improved to sixth fastest.

Daruvala put his Carlin up to second with a time just over half a second slower than his teammate. The Indian quickly fell down the order to fourth after Callum IIott and Felipe Drugovich went faster.

Gelael had a scare into Stowe with a full 360 as the Indonesian luckily avoided the gravel trap.

Shwartzman too had his lap time deleted for breaches of track limits into Copse as the championship leader struggled in 12th.

Jack Aitken’s dissatisfying Formula 2 season continued at the Silverstone track as his Campos was furiously worked on by his team mechanics. The Williams’s reserve driver remaining down in 17th position in the timesheets.

Guanyu Zhou moved up to third with a time of 1.41.348 before the Chinese driver fell to fourth after Daruvala improved to second.

Tsunoda went even faster as the Honda junior driver drove four-tenths faster than teammate Daruvala, maintaining Carlin’s stronghold on the first two positions on the timesheets.

It wasn’t all plain sailing for the Japanese driver who went too fast into Brooklands and spun the Carlin around. Tsunoda quickly gathered it together and got back onto the track without further issues.

Drugovich moved himself up to third with the Brazilian over a half-second behind Tsunoda. The MP driver quickly put himself in contention as one of many candidates to be one of many potential pole-sitters for qualifying.

Aitken’s nightmare session continued as the BritIsh-Korean driver went off first at Chapel before then taking an alternative route into Abbey. The Campos driver seemed to struggle to find a balance that suited.

Nobody could catch the Carlin pair however, with Tsunoda leading Daruvala for a Carlin 1-2 ahead of Drugovich, IIott and Zhou, and Ticktum rounding off the top six.

Championship contenders Lundgaard was in ninth, Schumacher in 11th, with Shwartzman only managing 14th whilst last weekend’s Sprint Race winner Luca Ghiotto could only manage 13th. 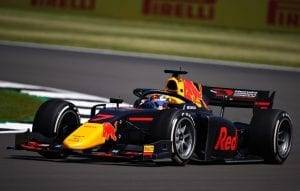